Pre-order your guide for overthrowing the patriarchy right now!

It seems like just yesterday, I was announcing that I was working on a new book. Not only is it done, you can finally pre-order it here and here.

It’s about motherhood and entrepreneurship and if everything I’ve written since becoming a mother and a founder doesn’t tell you my views, the cover of the book will: 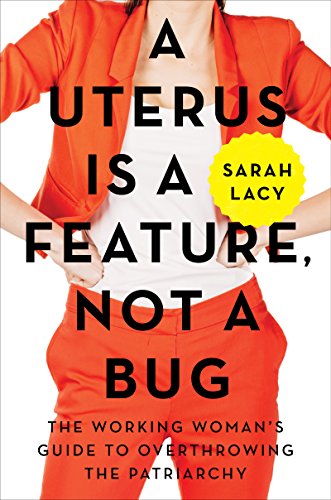 This book has sadly become way more essential in 2017 than it was when I signed the contract for it back in 2016. Back then we could cling to a hope that things were getting better for women. A woman was running for President and highly favored to win, Ellen Pao had come out against Kleiner Perkins putting a spotlight on “micro-indignities” that women face, unconscious bias was the buzzword in Silicon Valley and diversity stats were getting released with vows to do better.

Oh, those were the good ol’ days. Things weren’t actually better, but we could pretend at least.

It’s clear that “micro-indignities” are the least of what women at the Valley’s most celebrated company face. And despite all the talk about diversity: The numbers simply aren’t changing. What’s more: A trio of studies have shown that 40% of white men are sick of hearing about it, 75% care so little their companies have absolutely no policies in place to address it, and 95% do not consider it a “top problem.”

Since Sheryl Sandberg published  “Lean In” there’s been a trend of making a data-based argument for why gender discrimination holds companies back. We have. In spades. Guess what? It turns out the status quo doesn’t care about the data.

But 2017 is also an inspiring time to be a woman. The extreme hypermasculinity of the bros and the reality of a man who bragged about sexual assault being in the White House, the ungodly details of what happens at companies like Uber, has united women in a way I’ve never seen before.

My book aims squarely at the most valuable role women play in a patriarchy: Being mothers. Specifically, how it’s been used against us to make us feel weak and disabled. How that shows up in all that “data”: Nearly eighty percent of women are less likely to be hired if they have children—and are half as likely to be promoted. Mothers earn an average $11,000 less in salary and are held to higher punctuality and performance standards. Forty percent of Silicon Valley women said they felt the need to speak less about their family to be taken more seriously. Many have been told that having a second child would cost them a promotion.

I believed all of these lies about motherhood for much of my adult life. And then I had children. And the opposite of everything I’d been told happened: I became more productive, more driven, more ambitious, and more successful. I also became a better manager, because I became an empathetic manager.

I’ve spent the last year, trying to explore why those lies are so pervasive in our culture… and why they are so damaging, a reporting journey that took me around the world, around the US, and deep inside the psychology and playbook of the patriarchy.

This book is in some ways the story of my transition from “cool dude” Sarah Lacy to “badass female warrior” Sarah Lacy. It’s also in some ways a love letter to my children and how they transformed me, that I hope they enjoy some day. But more than anything, it’s the book I wish someone had given me in my 20s and 30s: A guide to standing together and taking what’s rightfully ours.

If you are sick of the bros, the trolls, the cat-callers, the boss who concern-trolled you out of a promotion, the mentor who advised you not to have another child if you wanted to raise funding, pre-order it now.