Wow. The defense of that sexist Stanford GSB video may be even more sexist than the video

About a month ago, I wrote a piece on just how badly Silicon Valley was reacting to the escalating conversation and allegations about sexism. I drew a link between the “boys will be boys” excuses we’ve heard around everything from Evan Spiegel’s college emails to the verdict in the Brock Turner rape case, and the scandals around Uber being dismissed because a 40-something-year-old man has tearfully said he needs to grow up.

In that piece, I linked to a pretty messed up video from Stanford’s Graduate School of Business that features the kind of over-sexualization you might expect from a fraternity, like scantily clad women having water fights. Michele Dauber-- the Stanford professor who has been leading the effort to recall the judge in the Turner case -- first brought the video to the media’s attention. In fact, a screen shot she posted from it was so rique, it was blocked by Twitter. Twitter!

Stanford can’t seem to decide if it’s outraged by this video or not. It’s been pulled down from the school’s official site, but the school’s written policies indicate it would have had to approve it in the first place. But let’s get back to Stanford in a minute.

In a recent article in UK’s The Independent, a spokesperson for the group who made the video showed exactly how such a bizarrely gender tone-deaf video was made by making an even more tone deaf justification of it.

We unequivocally stand in support of women's rights and disagree with the accusations that Unfinished Business promotes a culture of sexual assault or misogyny. We are deeply saddened that critics have conflated these terms with the consensual and positive sexuality portrayed by women and men alike in the video.

While we stand by the video, its creators, and performers, we also recognise that we cannot control its narrative or its impact at large. Out of affection and respect for Stanford University, we've made the independent decision to take down the public video in order to not interfere with the serious steps that the university is taking to ensure that there is no tolerance for sexual assault on our campus.

Let’s unpack that for a moment, because there is a staggering amount of things that this group-- poised to enter the tech workforce at the highest levels once they graduate-- don’t seem to get about sexism.

It’s comforting for Stanford loyalists to chalk this up to the also-familiar “few bad apples” defense. But Stanford strictly controls filming on campus. Here’s a link to the policy, which states that “Stanford’s name and marks may used only in connection with activities that meet high standards and are consistent with the University’s educational, research and related purposes” and makes clear that applies to all uses of the Stanford brand and logo including on branded merchandize such as t-shirts.

Note in this screenshot, every woman “positively” grabbing this bro is fully decked in the Stanford logo: 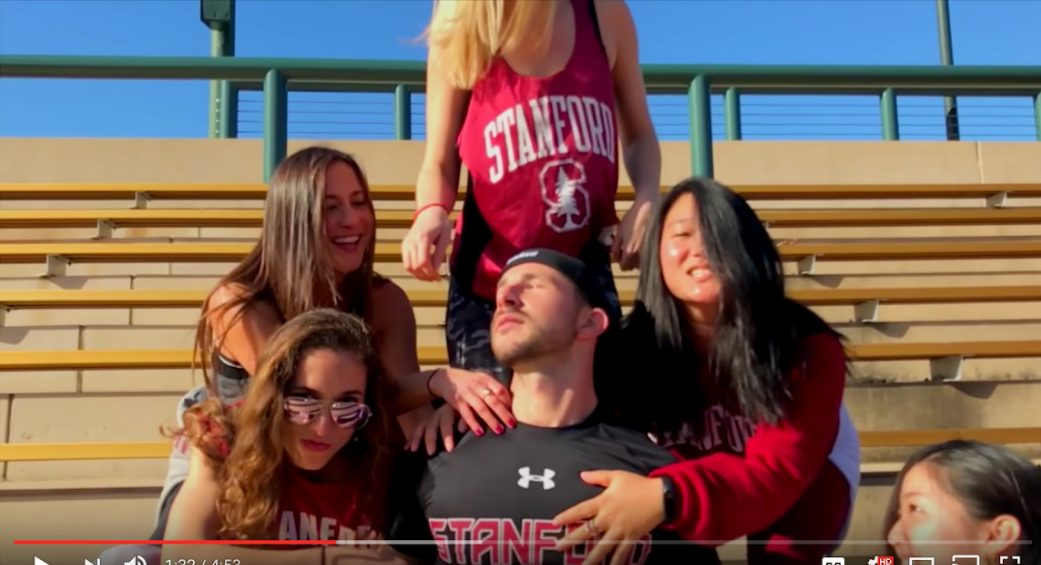 The policy on filming also states “The Use of Stanford’s name, other trademarks and emblems, or images in connection with any photograph or film is prohibited without written permission by the university.” So it’s pretty clear: Either they broke the rules or got permission. Written permission.

“Stanford’s policies forbid student use of the brand unless it ‘meets high standards’ and ‘reflects appropriately on Stanford’s reputation,” Dauber says via email. “Stanford has extreme policies to prevent its IP being used for exactly this reason-- to prevent it from being associated with something like this. One can only assume therefore that Stanford has no problem being associated with misogyny.”

That or one of the world’s most elite institutions somehow can’t seem to understand what misogyny is. And when it was explained to them, couldn’t understand why sexualizing women in a positive or negative way might be considered misogynist. Neither explanation is a good sign that things will change in the Valley for women any time soon.

In the last year or so, the conversation around sexism in the Valley has been increasingly exposed: A combination of Ellen Pao breaking every taboo by filing a lawsuit against a powerful venture firm, young developers like Tracy Chou forcing companies to disclose diversity stats, women like Susan Fowler bravely coming forward to detail Uber’s hostile work environment and HR’s enabling of it, and a broader “fuck this shit” uprising of women in the wake of Donald Trump’s election as President.

Silicon Valley desperately wants to project that it has come a long way when it comes to sexism.

It’s no longer OK for men to say this place is a “meritocracy.” If they -- publicly-- say it’s just a “pipeline problem,” there is an outcry so great, they are forced to apologize. When they argue that women should just change everything about themselves-- lying about being parents, pushing off their desires to become mothers, or even hiding the fact that they are women when seeking funding--  the skies of Internet outrage open up.

Unfortunately, actions are another matter. Despite so much outrage at Uber’s culture, for instance, the media has mostly moved on accepting that Travis Kalanick hiring a yet-to-be-named COO will solve the problem. And Reid Hoffman is one of the few billionaires and high powered Valley names to make a sizable donation to the campaign to recall Aaron Persky, the judge in the Brock Turner case. The bulk of the money have been donations of less than $100 by women deeply shaken at the world’s continued “Boys will be boys” excuses, as Dauber explained in our interview with her.

Valley elites could put pressure on Stanford to change things, if they wanted to. But beyond the headline outrage, the truth is no one seems to care. That’s backed up by a series of studies showing that inclusion of people of color and women simply isn’t a priority in the Valley.

What has changed dramatically in Silicon Valley is the courage of many of its women to risk their careers, reputations, and “cool girl” status in loudly calling this out. And the more that comes out about what women have quietly suffered in tech, the more the “why?” is slowly becoming clearer and clearer.

It’s as if we are steadily descending deeper into the psychology of just why the tech industry is so sexist, and at each stage the reality is difficult to take in.

The first level down from “meritocracy!” was the reality of unconscious bias: We are all sexist. We are all complicit in the problem. That’s still hard for a lot of gatekeepers who thought they were such great feminists to swallow.

The next level down was: White men in tech just don’t actually care. Many don’t believe there is a problem. A majority just believe it’ll work itself out if there is. That one is hard to accept too. When I published this story in February on the many studies telling us that-- loud and clear-- I got a huge “not all men!” backlash. Nevermind, it was men who actually answered the survey questions this way in overwhelming numbers.

And now we have excavated down to another level with this strange video created by Silicon Valley’s feeder school, and its even stranger defense of it. It’s not just that we’re all complicit. It’s not just that men don’t prioritize fixing this. The very men poised to become the next generation of power in tech don’t even actually realize what sexism, misogyny and a hostile work environment is.

This isn’t the boorishness of Donald Trump, some guy in a MAGA hat in a Red State talking. These are highly educated, elite, future tech leaders. In a stunning reveal of their lack of empathy, they have explained just why they made this video: They don’t know what sexism actually is, and they don’t really care to learn when it’s explained to them.

Despite their clearly impressive educational chops, I’m going to make it really simple for the bros at Stanford: If you think professional women being sexualized in a “positive way” is something to be proud of, you are the next generation of the same problem.