Woes before bros: Uber’s A-Team is finally fracturing… will they turn against one another?

Sooner or later, everyone gets held accountable.
By Sarah Lacy
May 31, 2017 · 7 minutes

The kind folks at Pitchbook have even put together a timeline, in case you’ve forgot a scandal or two. (I’ve noticed we all keep forgetting about that Department of Justice investigation amid the Eric Holder report and the Waymo Lawsuit.)

But one thing has been predictable if you’ve watched Uber’s behavior over the last four years of scandals: The A-Team never fractures. We didn’t need Susan Fowler to tell us that Uber had a protected class of bros in house, a group who would never suffer consequences, no matter how atrocious their actions. We didn’t need Travis Kalanick’s ex-girlfriend to tell us that Uber was a bunch of guys who felt they should be able to do what they wanted in the world. Both were just confirmation of the core of Uber’s culture: A grotesque extreme shadow version of the cult of the founder.

Cultures stem from the top and Kalanick himself is untouchable because he has board control. So, too, have his bros been untouchable.

There’s a symbiosis here: As Silicon Valley has become more dominated by the cult of the founder, I’ve asked VCs if there is ever an acceptable reason to push a founder out. Many will argue that a failing company isn’t a good enough reason: VCs should just allow founders to go down with their own ships, and changing one mid-stream is unlikely to solve a core fundamental flaw in a company.

One acceptable reason has come up over and over when I’ve asked VCs this question: If the senior team demands it and mutinies. Kalanick and his protected A-Team have been a symbiotic, misogynist circle of mutually assured destruction.

At least until now.

Everyone has a different definition of who is in Uber’s  “A-Team,” and many of the defections to date haven’t been part of it. David Plouffe and Jeff Jones, for instance, were comparative voices of reason within Uber… and that made them outsiders, we hear from multiple sources (and is obvious in the case of Jones who had hoped to fundamentally change Uber’s culture).

But in the last weeks, the departures and rumored departures appear to be getting at least closer to that inner-circle or at least it’s one time core members. First there was Rachel Whetstone, Uber’s do-anything fixer who was brought in as Plouffe’s replacement. Then there were reports that Ryan Graves-- Uber’s first hire and one of the board seats that protects Kalanick-- and CTO Thuan Pham might be the fall guys in the Susan Fowler scandal. Former employees have told us both are at least former “A-Team” members.

Then, yesterday, news came that Uber had fired Anthony Levandowski as a result of the ongoing Waymo lawsuit. This after initially backing Levandowski’s claims that he hadn’t stolen any data, and seemingly attempting to protect Levandowski by involving lawyers in discussions so they couldn’t be discoverable. The judge in the case has told Uber it can compel Levandowski to testify, and Uber got pushed to a place it clearly didn’t want to go.

If the Waymo allegations-- that Levandowski intended all along to deliver the stolen documents to Uber and that Uber was in on it-- are true, that certainly he’s about as central to the A-Team as anyone can get. Shared secrets like that unite “brothers,” as Kalanick has called Levandowski.

There are also Kalanick’s past exhortations of how similar the two were, how much of himself he saw in Levandowski. There are a lot of reasons Levandowski wasn’t considered expendable: One being how little senior self driving talent exists in tech and how in demand it is. But also, that “bro bond” which has seemed unbreakable in Uber until now.

Astoundingly-- the same day-- we got news that New York GM Josh Mohrer is leaving Uber. Mohrer has certainly tried to downplay the news with the usual “we accomplished so much here!” departure blog post. In an interview with TechCrunch he sought to distance himself from the company’s recent scandals.

It may come as a surprise to Mohrer that the tech press has access to Google. Mohrer was one of the original bros central to some of Uber’s earliest scandals, as TechCrunch points out.

In 2014, he was involved in a scandal violating Uber’s privacy policies, using “God mode” to track the movements of a reporter. But don’t worry-- Uber investigated the situation and took totally unspecified disciplinary actions. As we wrote at the time those likely included extra fist-bumps.

He was also involved in the company’s unethical and aggressive tactics to tank New York competitors, ordering and cancelling hundreds of rides from competitors-- something Gett compared to a “denial of service attack.”

There was also the time when Guardian assistant news editor Erin Mccann complained of being aggressively kicked out of an Uber cab, and Mohrer went on the attack, claiming that Mccann had deserved the aggression because she had threatened the driver's livelihood by asking for his badge number.

TechCrunch doesn’t even mention my personal favorite Mohrer story: The time in the wake of Uber threatening my family that he Tweeted a picture of the New York office dancing to “Shake it off,” with a hashtag #hatersgonnahate.

That was later deleted, once the Internet made clear how monstrous it was. Even Uber-- it seems-- has some shame. But don’t worry, we’ve got a screenshot: 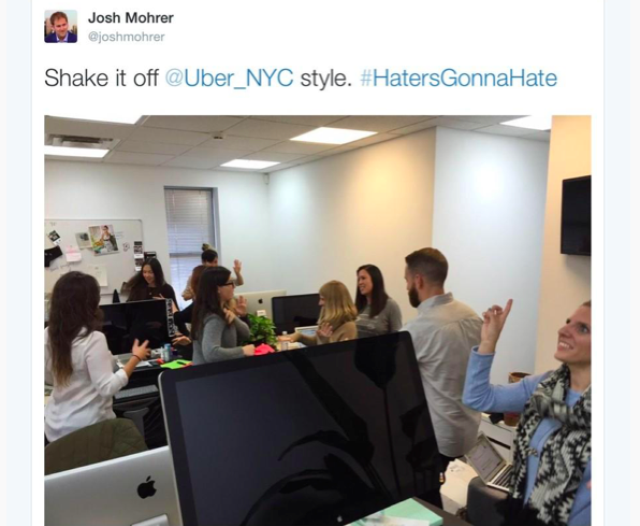 Nothing says true Uber insider like seeing Uber as the victim in one of its earliest, nastiest scandals. And nothing says dance party like threatening to “go after” someone’s family for doing her job. I can only imagine what song blared out “Uber_NYC style” once it came out in discovery that Uber actually did engage in “possibly criminal” oppo research tactics against a plaintiff and his lawyer suing the company. Or the disco ball that was wheeled out when Susan Fowler said her friends and family were being contacted in an attempt to dig up dirt on her, after her allegations against Uber’s culture. (Uber denied they were the ones going after Fowler. It also initially denied it did this against Andrew Schmidt, before a judge ordered documents be decrypted that proved it.)

Indeed, Mohrer was hired to replace Uber’s first New York GM, Matt Kochman, who quit after coming to the conclusion that Kalanick’s unwillingness to follow the law was “irresponsible.” As a senior executive during the years Uber would wind up in scandals that ranged from trade secret theft, gender inequity, and a Department of Justice investigation.

We can speculate on how close to Kalanick’s orbit Graves and Pham are these days. There may have been some Plouffe like fall out we’re unaware of. We can even see Levandowski as a patsy, used and tossed away by Kalanick. But Mohrer’s departure is significant. Mohrer was one of the key early bros whose job was defended no matter what he did.

And perhaps Mohrer has decided to leave of his own accord; perhaps he would have always been protected. Perhaps, he has simply grown weary-- like so many others-- of a year of epic scandals, the one-time “baller” Uber brand now something celebrities protest. Or -- more damning-- that it’s next valuation will all but certainly put Uber behind both Didi Chuxing and Waymo in terms of valuation. From #1 to #3…. Ouch. “Haters gonna see their options way under water” is way less catchy to dance to.

Mohrer may have decided the time to leave was now… while Uber still had some apologists and believers and that tumble from grace, the decision of the Waymo Lawsuit, the Eric Holder report… all of those were still in the Schrodinger’s Cat status of “Well, maaaaaybeee…”

Of course the central bro to watch in all of this is Emil Michael. Not only the one who bragged to journalists about wanting to go after other journalists, but the guy who clumsily tried to silence Kalanick’s ex-girlfriend, prompting her to tell the Information all about that executive trip to see Korean escorts. Michael too presided over Uber’s doomed attempt to win China. No bro has made so many costly missteps and been so protected. According to the New York Times, at one event, Kalanick even celebrated Michael for embodying the very culture of Uber. (Kalanick, astoundingly, meant that as a compliment.)

Several folks close to the company have said it’s unthinkable that Kalanick’s most trusted consigliere wouldn’t have been involved in the Otto deal. As 2017 and the Waymo case roll on, will that bond also be broken?