As dozens of VCs denounce him, Justin Caldbeck announces he is taking an indefinite leave of absence from Binary Capital

Yesterday I asked where the outrage was over alleged predatory behavior by Justin Caldbeck of Binary Capital, as first reported by the Information.

Today the outrage is mounting, including from many of Caldbeck’s male peers in the Venture industry.

Indeed, as this story was being edited, Caldbeck announced he is taking an indefinite leave of absense from Binary. Here is his full statement...

The past 24 hours have been the darkest of my life. I have made many mistakes over the course of my career, some of which were brought to light this week. To say I’m sorry about my behavior is a categorical understatement. Still, I need to say it: I am so, so sorry.

I direct my apology first to those women who I’ve made feel uncomfortable in any way, at any time - but also to the greater tech ecosystem, a community that I have utterly failed.

The power dynamic that exists in venture capital is despicably unfair. The gap of influence between male venture capitalists and female entrepreneurs is frightening and I hate that my behavior played a role in perpetrating a gender-hostile environment. It is outrageous and unethical for any person to leverage a position of power in exchange for sexual gain, it is clear to me now that that is exactly what I’ve done.

I am deeply ashamed of my lack of self-awareness. I am grateful to Niniane, Susan, Leiti, and the other women who spoke up for providing me with a sobering look into my own character and behavior that I can no longer ignore. The dynamic of this industry makes it hard to speak up, but this is the type of action that leads to progress and change, starting with me.

I will be taking an indefinite leave of absence from Binary Capital, the firm I co-founded in 2014. I will be seeking professional counseling as I take steps to reflect on my behavior with and attitude towards women. I will find ways to learn from this difficult experience - and to help drive necessary changes in the broader venture community.

The Binary team will also be taking measures to ensure that the firm is a safe place for founders of all backgrounds to find the support and resources they need to change the world, without abuse of power or mistreatment of any person.

I owe a heartfelt apology to my family, my investors, my portfolio, and the team at Binary, who have been completely blindsided and in no way deserve the pain I’ve caused. But most of all I apologize again to those who I’ve hurt during the course of my career - and for the damage I’ve done to the industry I care so deeply about.

A partial list of male VCs who have spoken out against Caldbeck in the past 24 hours includes Mike Maples, David Hornik, Bijan Sabet, Josh Kopelman, Matt Ocko, Mark Suster, Michael Carney, Steve Schlafman, Manu Kumar, John Lilly, Reid Hoffman, and Mike Dauber. That in addition, of course, to the many female VCs who called out the problem earlier, including Christie Pitts, Aileen Lee, Ashley Mayer, and Ellen Pao. (Apologies if you did, and I left you out. The condemnations mostly came in a clump last evening.)

Behind the scenes, I know several prominent VCs have been actively emailing Binary’s limited partners, asking them to investigate these claims and, if the allegations are confirmed, to act.

I’ve also heard that Caldbeck was already aware that the story was about to hit and was considering transitioning out of Binary Capital. (I asked the firm’s spokesperson yesterday if that were true but he would not confirm nor deny the claim. As evidenced by Caldbeck's statement today, it's clearly true now.) Matt Mazzeo from Lowercase was rumored to be joining the firm as a general partner as part of a rebrand and expansion. We’ll see where that possibility stands now Caldbeck is gone and as this story continues to gain steam. Certainly the makeup of Binary’s partnership, and indeed the firm's entire future, is now in flux.

Binary’s initial dismissal of Caldbeck's behavior as merely part of his “flirting” and “dating” and “social interests” implies that under-the-table groping is something women should expect in business meetings. That points to a broader problem at the firm, with or without Caldbeck, and whether Mazzeo joins or not.

The Binary team will also be taking measures to ensure that the firm is a safe place for founders of all backgrounds to find the support and resources they need to change the world, without abuse of power or mistreatment of any person.

That remains an uphill statement, not least because it took Binary and Caldbeck three attempts to get to anything like a promise to change the firm's underlying culture. A couple of hours after I published my piece yesterday, pointing out how breathtakingly arrogant Caldbeck’s and Binary’s response to the Information was - dismissing the claims as mere “flirting” -- Caldbeck took another swing at a mea culpa. This time he wrote: “There’s no denying this is an issue in the venture community, and I hate that my behavior has contributed to it."

He might have added “...for so long.” This morning, Dan Primack of Axios published another damning piece about Caldbeck claiming his treatment of women was an “open secret” in Silicon Valley and detailing a pattern of behavior that goes back to Caldbeck’s earliest days at Bain. Primack notes how many reporters were chasing this story and that if three women hadn’t had the courage to go on the record, no one would have been able to write it.

If it’s true that many in the Valley knew about Caldbeck’s predatory behavior and said nothing, and if it’s also true that several journalists were unwilling to hit “publish” without a victim willing to go on the record and risk destroying her own career, then we have yet another example of why this kind of behavior continues to plague the tech industry. And why that directly leads to so many women leaving the industry.

It’s encouraging, of course, that so many prominent male VCs are outraged by Caldbeck’s alleged behavior today.

But it’s also true that a lot of the statements came only after media outrage forced their hand. (See also Arianna Huffington initially laughing off David Bonderman’s sexist comments, until someone leaked the tapes to the press and suddenly Huffington and her boardroom buddies are SHOCKED and HORRIFIED.)

I have yet to see anyone say they won’t co-invest with Caldbeck or won’t do business with Binary Capital until the claims are fully investigated. (If I’m wrong, shoot me a note and I’ll update this and give you credit.)

Still, I believe there are men on both the VC side and the founder side of the table who genuinely want to drive predators out of the ecosystem and that came across in some of the statements on social media yesterday. David Hornik of August Capital argued that by not throwing Caldback under the bus, his enablers were throwing the venture industry writ large under the bus:

This is outrageous behavior. It is unfair to the women who were subjected to it. And it should be loudly condemned by the venture community. As a VC I'm close with texted me, "If I ever did that, I hope you'd swiftly throw me under the fucking bus." And, yet, here is the response from Justin's venture firm:

There is no bus in sight. And Justin's partners are sure as hell not throwing him under it. But what they are doing is throwing the entire venture business under the bus instead. They are re-enforcing the idea that venture investors will allow this outrageous behavior to go on unabated because boys will be boys and, hey, sometimes that includes a little "flirting" (knee grabbing, sexting, etc.).

We VCs can't allow this to happen. And we certainly can't sit back silently when it does.

Reid Hoffman wrote a long post on LinkedIn today calling Caldbeck's actions "entirely immoral and outrageous," and proposing an industry-wide HR function "so that venture capitalists who engage in such behavior face the same sort of consequences that they would if their overtures were directed at an employee." He proposed a "decentcy pledge." It's a good name, because a woman's right to not be groped in a business meeting does boil down to basic human respect and decency.

Hoffman, Hornik and others have insisted any VC acting this way hurts the industry. A telling anecdote about Caldbeck that showed up on Mike Maples Facebook thread about my story, from serial entrepreneur Alex Castro gave an example of why predators are bad for entrepreneurs of any gender. 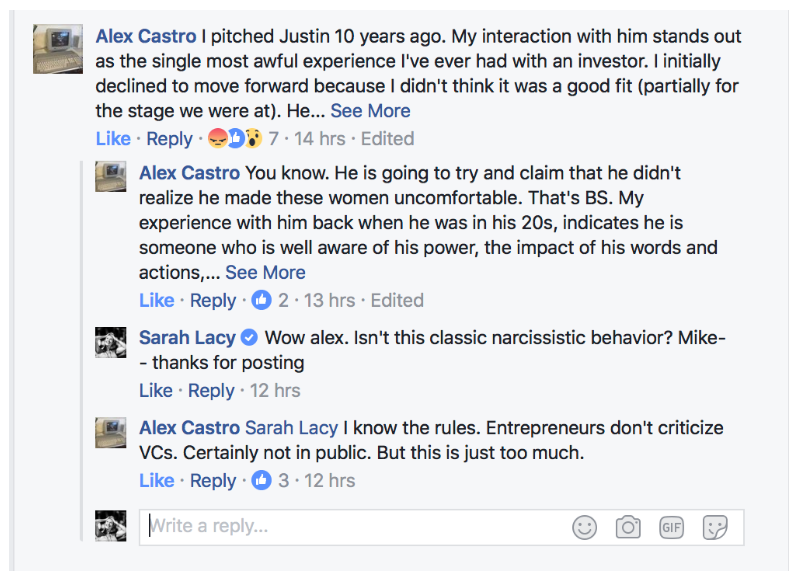 As Castro said later in that same thread: “Unfortunately for him, he ran into some very strong women.”

Indeed. If Caldbeck’s treatment of women in the Valley has been an “open secret” I hope more come forward until there is real change. And I hope that list of VCs above who are condemning that go out of their way to make sure these three brave female entrepreneurs are not retaliated against when it comes to future fundraising.