Founder: Days before scandal broke, Binary's Justin Caldbeck "tried to use funding to shut me up"

What a difference a day makes.

When Binary Capital’s Justin Caldbeck was first exposed as a serial predator by The Information, he issued a statement that was, frankly, breathtaking:

“I strongly deny The Information’s attacks on my character. The fact is, I have always enjoyed respectful relationships with female founders, business partners, and investors” he said.

Binary was equally dismissive, describing the reported behavior as “a few examples which show that Justin has in the past occasionally dated or flirted with women he met in a professional capacity.”

Just hours later, though, Caldbeck and Binary had completely changed their tune:

“The past 24 hours have been the darkest of my life. I have made many mistakes over the course of my career, some of which were brought to light this week. To say I’m sorry about my behavior is a categorical understatement… The Binary team will also be taking measures to ensure that the firm is a safe place for founders of all backgrounds to find the support and resources they need to change the world, without abuse of power or mistreatment of any person.”

From “not guilty” to “I have made many mistakes… Binary will be taking measures to [protect against further] abuse of power and mistreatment."

Caldbeck’s original statement seemed to imply that either groping a woman under a table during a business meeting was a “respectful” way to treat her or that all three women speaking on the record were lying. But then his statement the very next day seemed to admit he had done everything he was accused of -- so much so that he needed counseling and a leave of absence.

The about face is even more pronounced given what I’m hearing from multiple sources about Binary’s aggressive attempts to shut down the story right up until publication. Those sources describe threats of legal retribution against anyone reporting Caldeck’s behaviour.

And that’s not all.

I’m also now learning that Caldbeck, knowing the story was close to breaking, apparently made one last gasp effort to stop at least one of his victims coming forward.

Earlier today Niniane Wang shared with me an email she received from Caldbeck three days after she agreed to go on the record for the Information’s story. According to Wang, Caldbeck had only contacted her once in the previous two years. 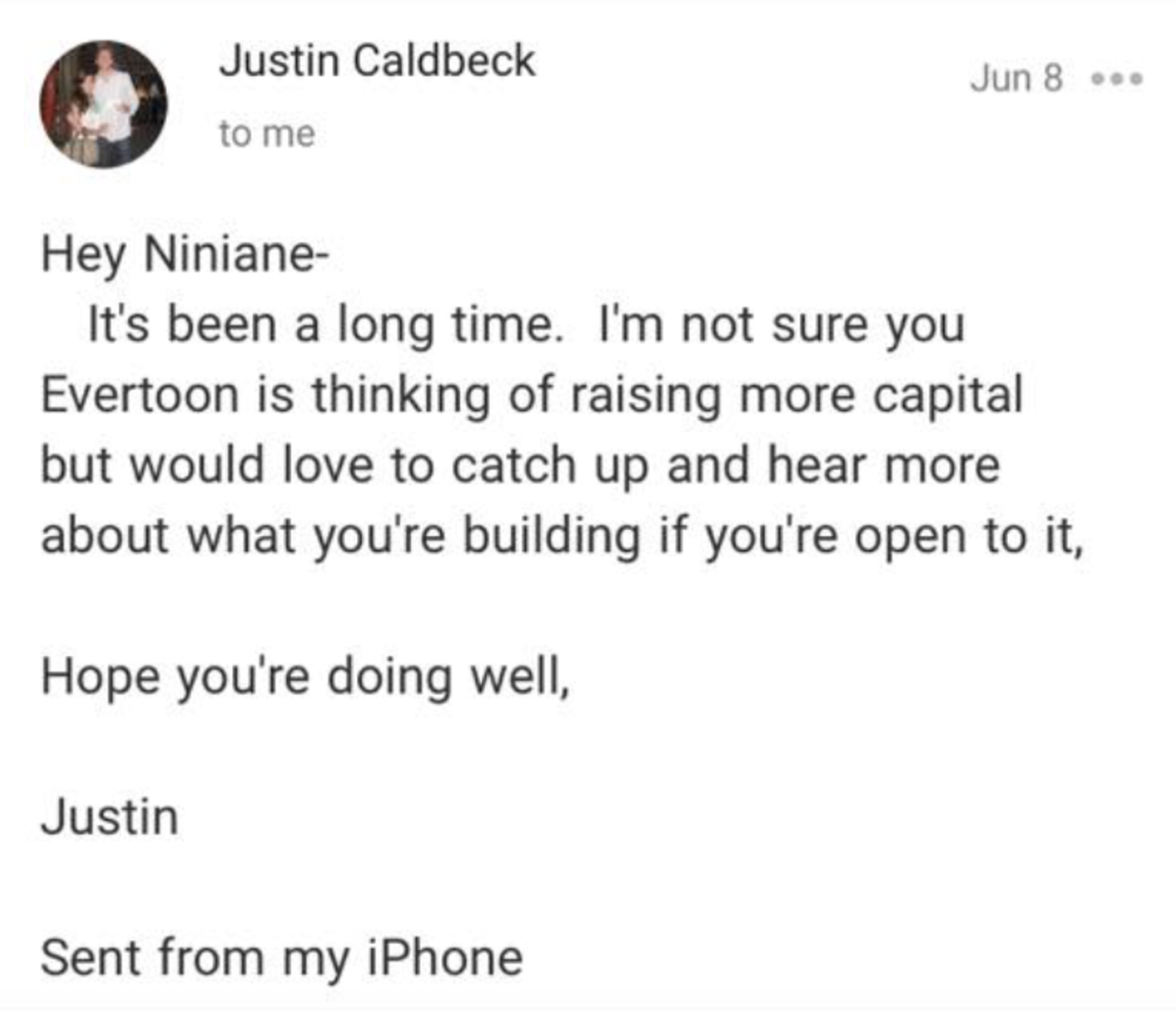 Again this was received three days after Wang had agreed to go on the record about Caldbeck's behavior. Wang says she interpreted the email as an attempt by Caldbeck to: “stop the ‘Justin uses funding to harass women’ story by…. Trying to use funding to shut me up.”

I've asked Binary for comment on the email and will update this story if I hear back. But certainly Wang's interpretation of the email seems reasonable especially given what we now know about other efforts Binary was making to shut down reporting by the Information and others.

The whole story is disgusting -- but one part of it is both disgusting and puzzling: Why did Binary initially publicly support Caldbeck only to turn around the next day with such a dramatic mea culpa and the promise to completely overhaul the way they do business? Why not do the right thing in the first place and get out ahead of the scandal?

One possible/probable answer: It seems that as the story was about to break, Binary was in the final throes of raising an additional $75 million to its second fund, predicated on Matt Mazzeo joining the firm. The firm was trying to do everything it could to close that fund before the scandal broke, apparently even dangling future funding opportunities at one of the victims.

Venture funds typically last for ten years. So it’s no small thing for Binary to secure this fund before the full effects of the scandal are felt. It will buy them time. Time for a rebrand, time to get some reputation experts to scrub those search results, time in the penalty box, time for Caldbeck’s rehab, time to hire a female partner so things look better.

It wouldn't be the first time a firm had jumped through hoops to try to avoid a Caldbeck-related scandal. Dan Primack’s Axios story about Caldbeck gave the example of…

[S]eparate accusations against Caldbeck by the female founder of a company in which he had led a Lightspeed investment (and where he served as board observer). The situation rose to the broader board level, with the ultimate resolution resulting in non-disclosure agreements on all sides. Lightspeed also would sell some of its existing investment in the company to a different investor, although the exact reason for that remains in dispute (what isn't disputed is that Lightspeed's sold shares would later rise in value).

Four separate sources have told me the name of that company and confirmed that everyone involved is bound up by gag orders and NDAs. I’ve emailed the company for comment and want to give them a bit longer to respond before naming them here.

As you can imagine, Wang was distraught when she heard that the delaying tactics may have worked for Binary. “I felt helpless for seven years,” she told me. “Then for one day, I felt like I actually made a difference. Now I feel helpless again.” An hour later she added, “You know what? No more feeling helpless. I am going to ask the LPs to withdraw from fund two. We must fight.”

As entrepreneur Alex Castro said of the women who spoke on the record about Caldbeck, “Unfortunately for him, he ran into some very strong women.”

I have a longer story on Binary coming Monday.