The Free Market that goes around, comes around

I remember talking to entrepreneurs in the early days of Web 2.0 and the user generated content revolution.

Even back then-- before we could imagine the rise of fake news, before two billion people were on Facebook, before the backlash to all that permanence would lead to the rise of a company like Snapchat-- even back then there was fear of collecting all of this data. Would companies be good stewards of it?

When I spoke to the (then) young men building these companies and asked these questions I was always given the same response: It isn’t in our best interest to abuse user trust, because the entire content of our sites are users. They’ll just leave.

Self interest, they argued, would force them to be good companies. The free market at work.

So, that hasn’t exactly worked. Companies like Google, Facebook and Amazon have grown so dominant that it’s all but impossible to quit them and still be a part of the modern world.

The power asymmetry -- if you will-- between a company like Facebook who holds all of your social connections in the palm of its hand is simply too great for most of us.

Which brings us to the rotten state of the venture world. While top VCs will fall all over themselves trying to compete for certain deals, in most cases, the power asymmetry between a VC and a founder is at least as great, especially if the founder is a person of color or a woman. These VCs talk about how founder friendly they have to be and the value they have to add and that money is the least of what they offer. The Binary Capital partners said all these things-- go back and look at the press clippings we’ve cited a few times this week when they closed their second fund.

In reality, as we’ve detailed at length, these two men played mind-games on the women “lucky” enough to be in their orbit. And that’s before the latest allegations against Binary, Caldbeck and Teo as laid out in a lawsuit filed by former employee Ann Lai. According to Lai, Caldbeck was positively drunk on the power he feels over her to end her career and destroy her “narrative” when she wants to quit the overtly sexist environment. 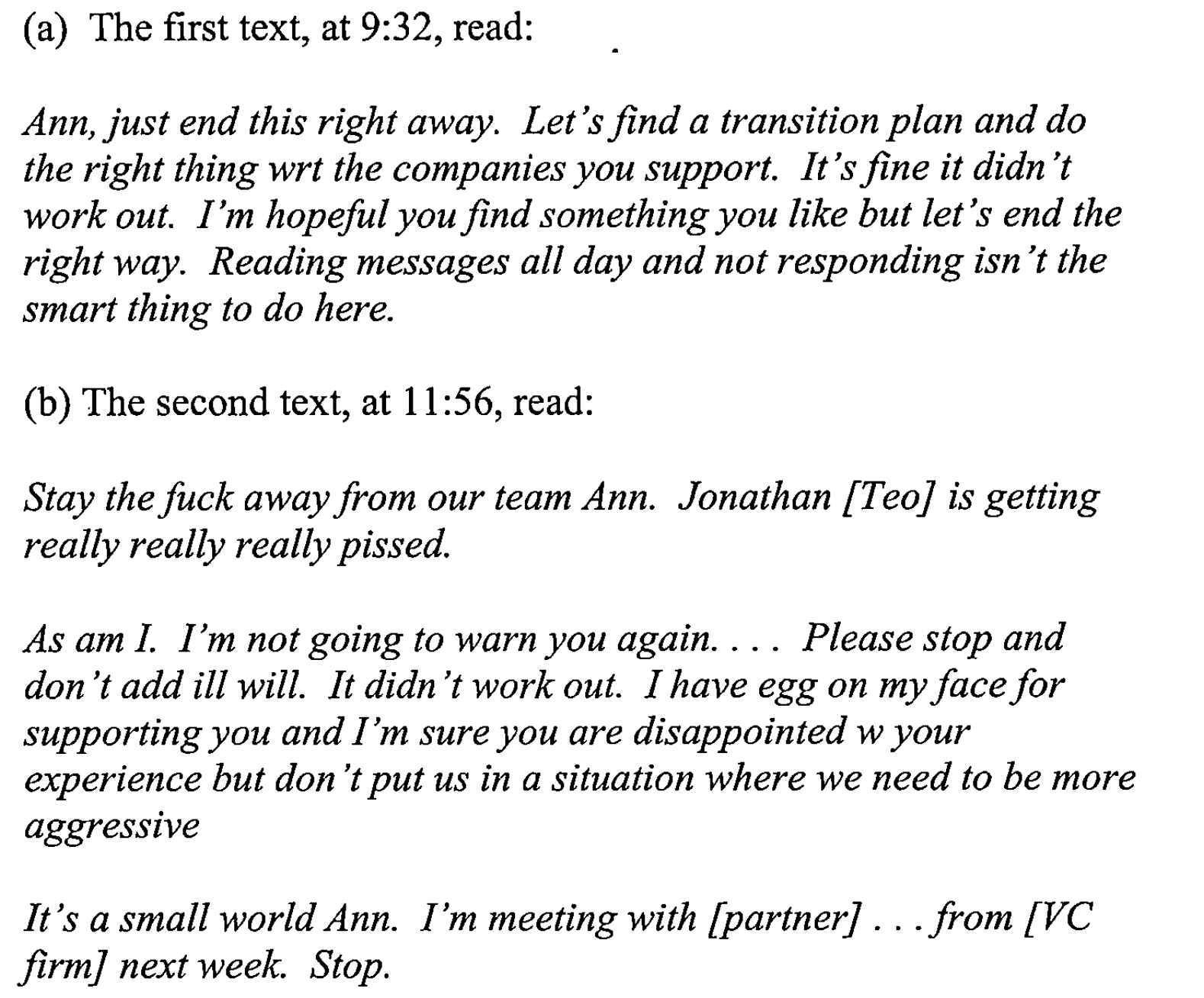 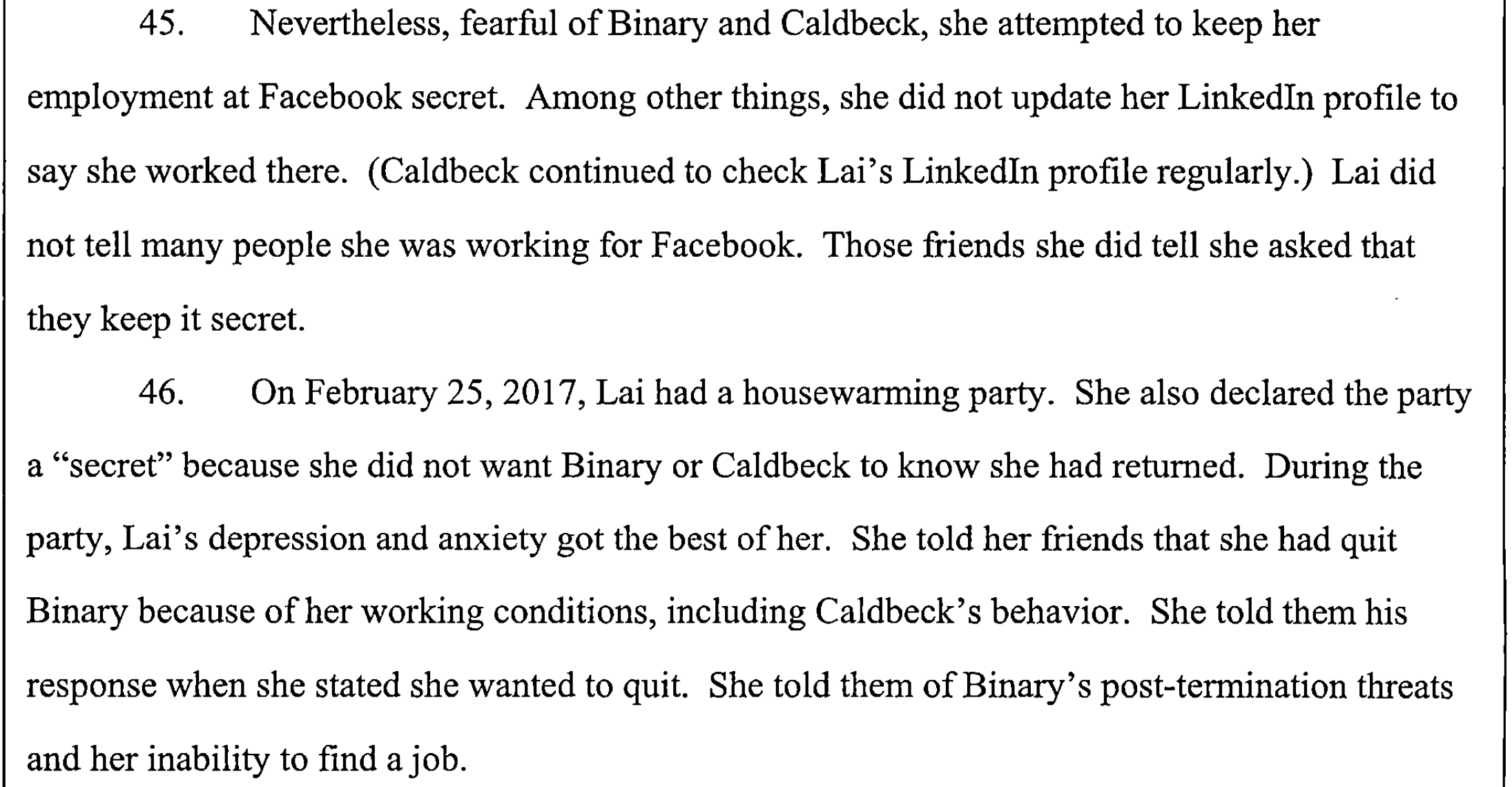 It’s hard to imagine a better way to throw cold water on this “we’re of service!” myth of the venture industry. Read this complaint. This is clearly not the mental image that VCs like the ones at Binary Capital had of themselves. So many people-- from “woke” VCs like Chris Sacca to your average dude on Twitter-- keep asking why more women aren’t coming forward. READ THIS COMPLAINT.

This isn’t mere whisper networks of dudes telling other dudes that a woman is a “troublemaker.” Justin Caldbeck and Jonathan Teo were allegedly regularly scanning Lai’s LinkedIn profile to actively sabotage her efforts to find another job. Because of horrible actions they did.

And yet, even amid this great power asymmetry: Finally, the truth has come out thanks to some very brave women who took a potentially career-ending risk nonetheless. (If you want to celebrate their bravery in T-shirt form, go here. All proceeds go to the Aaron Perksy recall.)

This time-- this time-- the retribution was swift and damning. In just a week, Binary Capital is gone and both of the partners are gone from both funds. These two are likely wishing they “[had] no narrative” right about now. That would be mercy.

An army of Teo’s pals have argued that this is unfair. He pled -- via his Facebook page-- for more time to unwind all this. We’ve been inundated with a hand-wringing chorus of “he’s a good guy.”

I don’t want to overstate my frustration with the women defending him. Some of them are also victims-- as we detailed yesterday, Teo was complicit in a party scene at the core of Binary where women had to behave a certain way to continue to have access and lived in fear of a sudden blacklisting.

But this also boils down to the difference between sexism and misogyny. A lot of people use them interchangeably, but according to philosopher Kate Manne, sexism is the belief system that holds up the patriarchy. Misogyny is the tool by which it is enforced. Sexism is universal-- we are all victims of it. Misogyny is only deployed when needed. If you are the “right” kind of woman, you may not experience misogyny. If you are a white woman-- for instance-- pitching a VC who only preys on Asian women, you may never know of his dark side.

This is important to keep in mind over the next few months, because shit is about to explode. Many women will likely be horrified learning of the other side of a male mentor who may have been helpful for us. Don’t fall into the cool girl/“good guy” trap. Wait, watch, and listen for the evidence.

A firm many are watching now is Lightspeed Capital. Now that the truth has come out that they knew Justin Caldbeck was sexually harassing women, and used the unstated threat of thwarting future fundraising to silence her, while giving Caldbeck a positive reference to the LPs who would fund Binary.

If the partners of Lightspeed have a soul, they must die inside reading Ann Lai’s complaint. This firm didn’t have to exist. We could have ended it.

It’s horrifying to sit back and think: Justin Caldbeck acted atrociously and when given the opportunity his former employers did nothing. Ann Lai apparently did nothing inappropropriate except try to leave a toxic environment and Caldbeck and Teo allegedly tried to destroy her ability to ever work again. A jaw-dropping asymmetry of power, based simply on gender.

If I were at Lightspeed now I would do a few things. I would immediately release the gag order on Stitch Fix’s Katrina Lake. I would hire a firm to do a thorough investigation of the firm’s actions to turn up anything else like this. I would immediately start recruiting more female partners and associates. I would offer give a shit load of money to some women’s charity in the name of the victims that came forward and those who were too trapped in this power asymmetry to be able to. I would come clean in more than just a few tweets saying they should have done more-- explaining why the forces of the industry enabled them to allow a sexual predator to raise a new fund and a larger profile.

They need to deeply go inward, and then explain outward. (More tips from Ellen Pao and Project Include here and tips for individual VCs here.)

And other firms-- throughout Silicon Valley-- need to do the same before they get dragged into this. Several other stories are in the works, with brave women coming forward, going on the record and naming names. Get ahead of this. Do you own investigations. Be public about the findings.

Think about off-sites and ski trips and other industry get togethers. Most of these don’t get any wilder than a few glasses of whiskey late night by a hot tub. But still: Think about the position you are putting women in if they need to be in a bikini in order to “network.” For the avoidance of doubt, if it’s a bunch of people who all work in an industry together: It’s a work trip. If it’s essential enough to your deal flow to be paid for by the firm: It’s a work trip. If it’s how you find the next unicorn or convince a founder to come to your firm: It’s a work trip. Make sure your team understands that it needs to be treated as such.

Create some sort out outside legal firm that women can report bad behavior to, that will be tasked with investigating. Don’t make going to the press the only recourse women have because while it may be great for our subscriber numbers, this will not end well for you. For God’s sake, hire more female partners.

This is your final warning.

It was Michele Dauber-- who is leading the Persky recall effort-- who made the point about what finally brought down swift retribution on Binary Capital: That great free market you all love so much. Fair or not? Good guy or not? It doesn’t matter: The market has spoken. Finally.

The question is-- will it continue to speak as more allegations come out?

Binary Capital was, in a sense, the easy one. It was a small, young, two-person firm and the actions were unmistakably egregious. They didn’t yet have massive home-runs to their name, and their firm wasn’t an institution-- it was just them. What happens when the glare shifts to a partner who is an icon in the Valley? Or a partner at a major firm where the reaction isn’t going to be as swift or damning?

What is justice in that case? Because an unintentional victim in all of this are these firm’s existing portfolio. I’ve heard of at least one company who has spent the week with unreturned phone calls, wondering if that commitment Binary made to lead their round is happening or not. Those moments can kill companies. Other startups are horrified to have them on their cap table. This is not a reason to protect predators, clearly. But we need to acknowledge that there’s a profound and wide ripple effect to justice being done. It isn’t fair to say those companies just shouldn’t have taken Binary’s money. Remember: Many of their LPs didn’t even know about this stuff.

Will sexism be the correction in the bro/unicorn era that the markets never delivered? So far it’s taken down the founder CEO of the largest private company and has wiped an up and coming bro-firm off the map in a week’s time.

This is a singular moment in venture capital history: I would have never believed that a VC could be fired-- that a firm could be blasted off the earth-- for a VC hitting on a propositioning women. What happens now is equally thrilling and terrifying. Decades of pent up rage and -- my guess?-- thousands of collective victims have seen a glimpse of what truth can do.

This is no longer about doing the right thing. That has long passed. You didn’t, venture capital industry in general and Lightspeed in particular. This is no longer about following the data on how gender and racial inclusive teams yield better results. As an industry, you failed one that one too. The beauty of this moment is it’s all about your wallet and your survival.

We’ve reached the point where the Uber board finally took action: Money and survival. Viva the “free market”!