Last week was meant to mark a return to health for the tech IPO market, but instead it came down with a nasty summer cold.
By Kevin Kelleher
Jul 5, 2017 · 5 minutes

Last week was meant to mark a return to health for the tech IPO market, but instead it came down with a nasty summer cold.

When the week began, 11 tech companies had gone public so far in 2017, beginning with Snap's offering in early March. Many of those IPOs, like Snap and Cloudera, priced above their original pricing ranges, suggesting a strong demand among institutional investors. And all but two of them – AI startup Veritone and Chinese data-center company GDS Holdings – were trading above their offering prices.

With major stock indexes trading near record highs, the week should have been a good one. Especially with Blue Apron, the best-known tech IPO since Snap, emerging from the pipeline. Instead, Blue Apron priced its IPO at $10 a share, below the initial range of $15 to $17 a share. Blue Apron couldn't muster the first-day pop that most tech IPOs enjoy, closing at $10 a share Thursday. The company fell 7 percent the next day, closing at $9.34 a share.

The next day, Tintri, an enterprise-cloud company, debuted at $10 a share. Tintri was also priced below its original pricing range of $10.50 to $12.50 a share, although it rose 5 percent on its first day.

Overall, the downward repricings and lackluster first-day performances suggest a waning appetite among investors for tech startups going public without a clear path to profitability. Snap was supposed to set the tone for the market, and in a way it did: Its mounting losses, negative operating cash flow, and shrinking pile of left investors wary of startups with similar financials – particularly in the wake of Snap's disappointing first quarter.

On Friday, online real-estate broker Redfin filed to go public. Like Snap and Blue Apron, Redfin had been seeing strong revenue growth. It also posted a larger loss ($28 million) last quarter than the year-ago quarter ($24 million). Redfin also had negative cash flow of $22 million last quarter and had $38 million in cash on hand. Not much if it sustains that burn rate.

These companies will use their IPO proceeds to try and finance new growth that could push them toward positive cash flows and ultimately profitability. This isn't to say they are at all in trouble. But the pattern also suggests that many of the tech startups launching IPOs this year aren't just seeking new capital, they're also trying to beat a ticking clock. It's almost as if the IPO has become the financing plan of last resort – hold out for other options if you possibly can. And what we saw last week indicates that investors are sensing that, and are starting to demand a discount.

It's not just the net losses and declining cash piles. Institutional investors are sometimes eager to buy into IPOs of growing tech companies, provided the outlook is sunny enough. In recent weeks, the outlook has been turning cloudier. Not for the cloud or online business models – there's no reason to think these in general won't remain promising for years – but for the economy and markets at large. And that darker outlook could have a significant impact on the plans of other tech companies to go public.

On Wall Street, there has been a growing sense that the bull market that began in 2009 is on its last legs. It started a few months ago, with outlier voices like Quantum Fund founder Jim Rogers, who told Henry Blodget to get ready for the crash of a lifetime.

Since then, others have voiced other concerns, if not on the dramatic scale of a big crash. Yale economist Robert Schiller has warned a couple of times in recent months about the market's high valuation, although he shied away from suggesting a crash since valuations can remain dangerously high for a long time. Schiller created an adjusted PE ratio, called CAPE, that stands at 29.66, its highest level since the dot-com boom and on par with the level before the Black Tuesday crash of 1929. 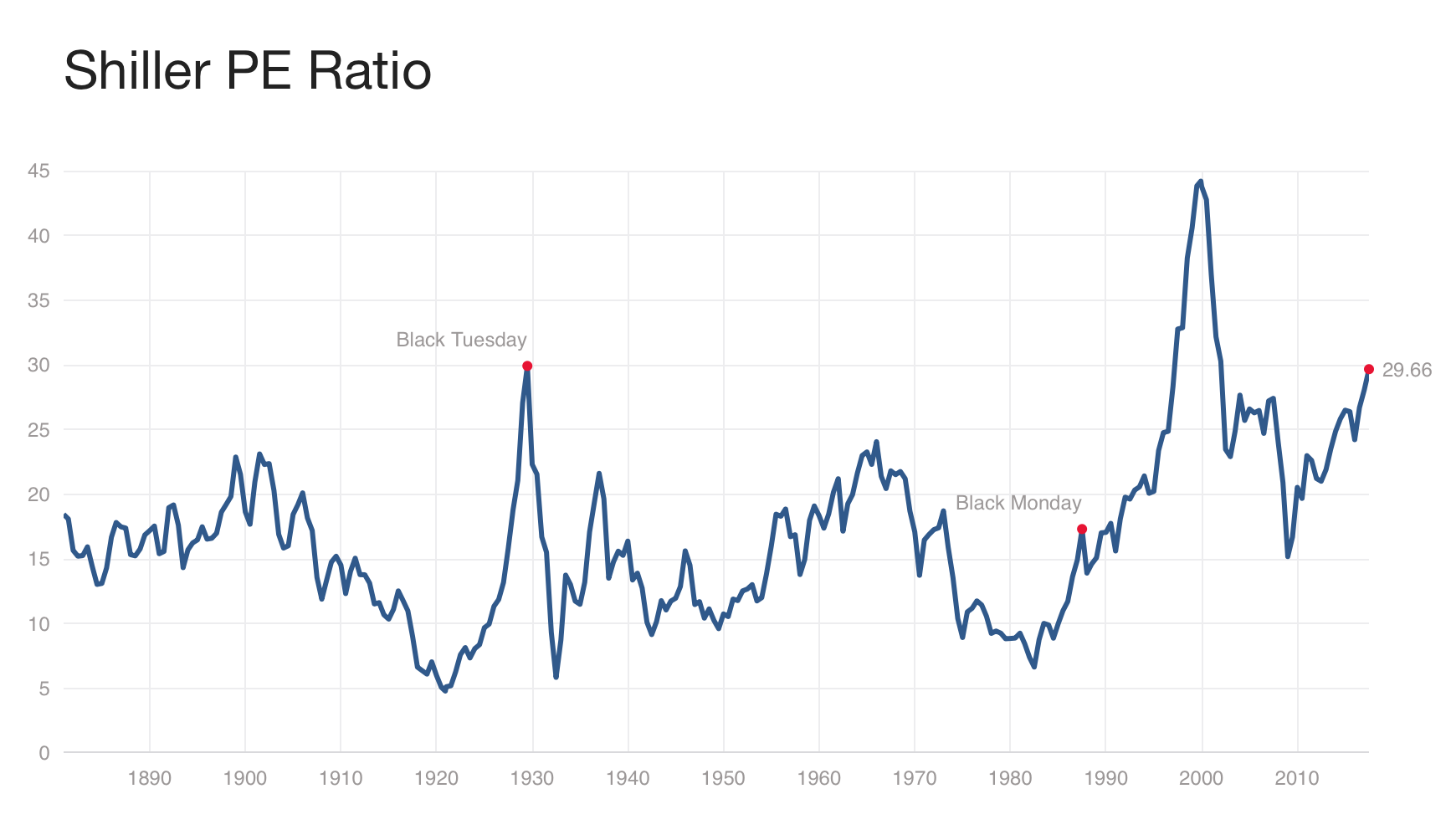 And last week, another hedge fund manager not only predicted a market “avalanche” but also a date when it begins: Valentine's Day 2018. If that specific date is questionable, the reason for the correction is one often cited by others. The Federal Reserve has been raising interest rates with little effect on inflation or markets so far. Starting in the fall, it is expected to also begin reducing its balance sheet, reversing the quantitative easing program that has helped underpin the eight-year bull market rally.

Of course, as long as there are bull rallies, there are bears predicting its end. But there are other reasons for concern. The so-called Trump rally, which has pulled the Nasdaq Composite up 14 percent this year, is based on reform that look increasingly uncertain. The dangerously high valuations. The recent, sudden selloffs in overvalued tech giants. And the months of eerily low volatility in US stocks, which is often a precursor to renewed volatility.

The CBOE Volatility Index has been below its 250-day moving average (the red line in the chart above) ever since election day. With stock indexes near record highs, when volatility does return it's likely to be on the downside.

Of course, the market has a way of confounding such conventional wisdom, just as it did after Brexit and after the 2016 presidential election, both of which triggered selloffs that lasted a day or so before the market returned to set new record highs. But even if these concerns don't pan out, they are increasingly on the minds of investors, and that breeds the kind of uncertainty that can cause investors to shy away from money-losing IPOs.

The outcome could be a wave of tech startups moving into the IPO pipeline just as investors are growing cautious ahead of the Fed's tapering. It doesn't take a crash to scare them off – an increase in the volume of voices expressing concern could be enough. That could lead to more downwardly revised offering prices, if not a tighter IPO pipeline. In the end, Blue Apron and Snap could be some of the luckier ones: They got into the public markets while the getting was still good.