Update II: Canter has published an "apology" on Medium

Sometimes explaining why someone is fucking awful takes a lot of words.

Other times it requires almost no words at all.

Below, falling firmly into the latter camp, is a series of increasingly unbelievable (decreasingly believable?) messages posted on Facebook over the past few days by "master of multimedia" Marc Canter and his wife, Lisa Brewer Canter.

In the days long rant, the Canters insist that Marc Canter is the real victim of the ("fake news") sexual harassment claims made against him in the NY Times. And that the target of his predatory behavior  deserved to be harassed because she is a "nutjob" and a "self absorbed hustler" who wore a "plunging neckline." They also lay out their case for why what Canter did was not really harassment because he isn't really that powerful and because attractive women expect to be flirted with.

The messages are punctuated with notes from the Canters' friends, acknowledging that Canter frequently says and does unbelievable things but insisting "his heart is in the right place". At one point, Canter's friend expresses satisfaction that Dent apparently recently had her laptop stolen, because "sometimes you have to trust... the universe to take care of the situation."

(Note: The lone voice of outrage/sanity in the thread below, Michele Dauber, is the same  Stanford professor Michele Dauber who is leading the Aaron Persky recall campaign.)

And so, with no more words required, I present Marc and Lisa Canter and their audition to become the Bill and Camille Cosby of Silicon Valley...

Update I: Marc Canter has responded. See below. 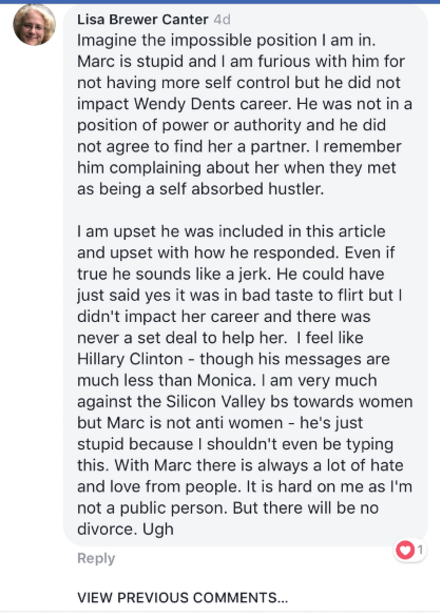 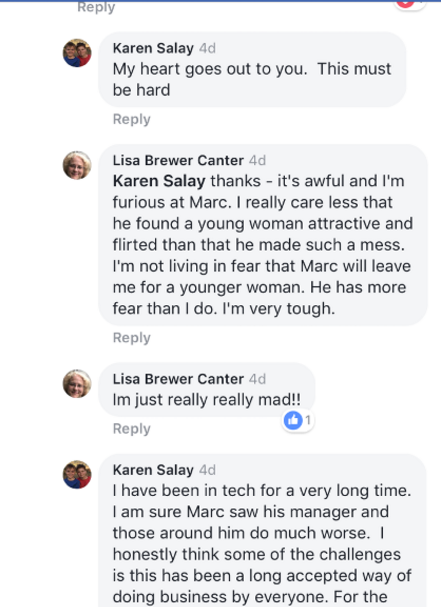 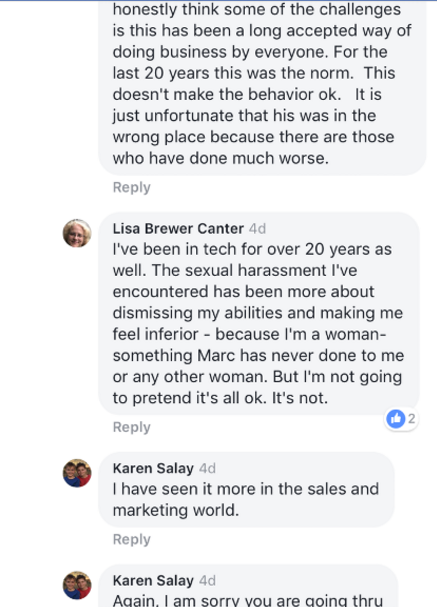 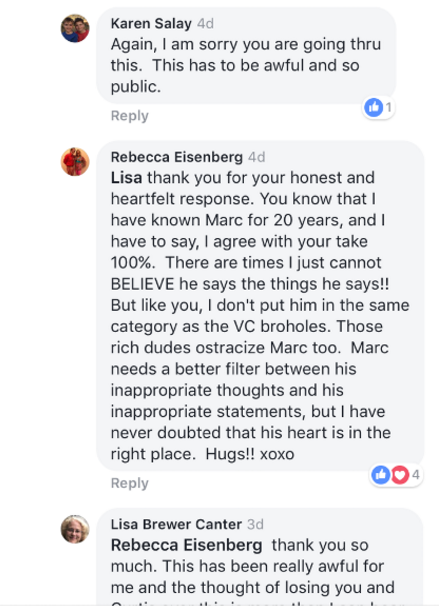 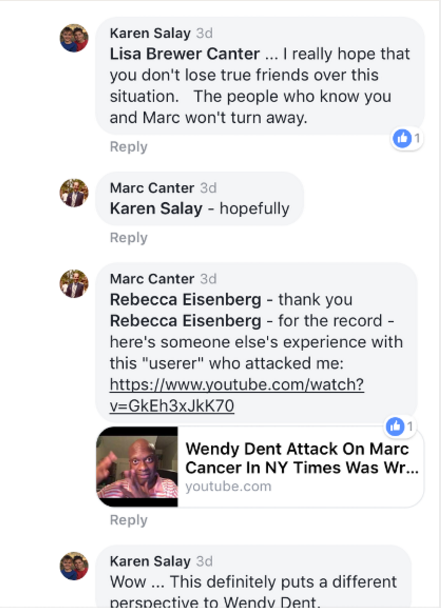 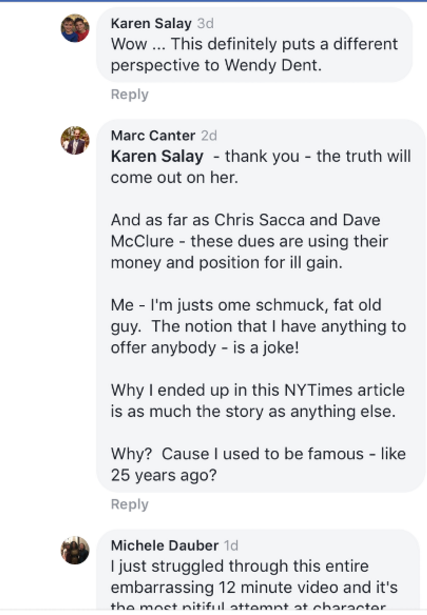 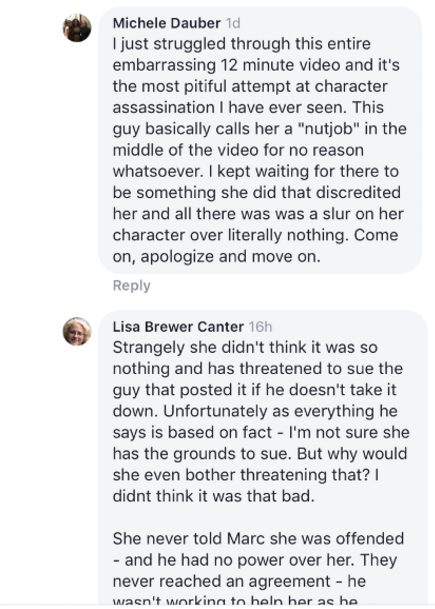 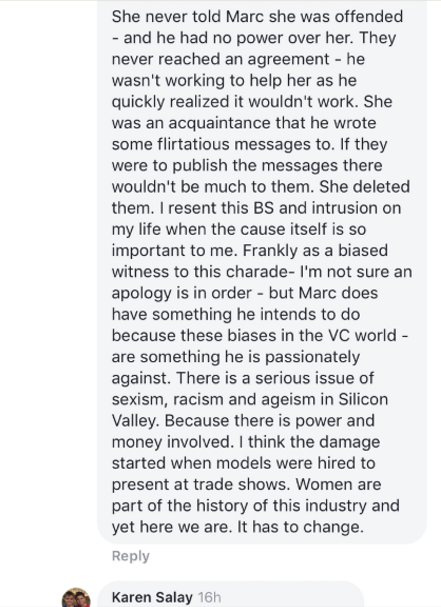 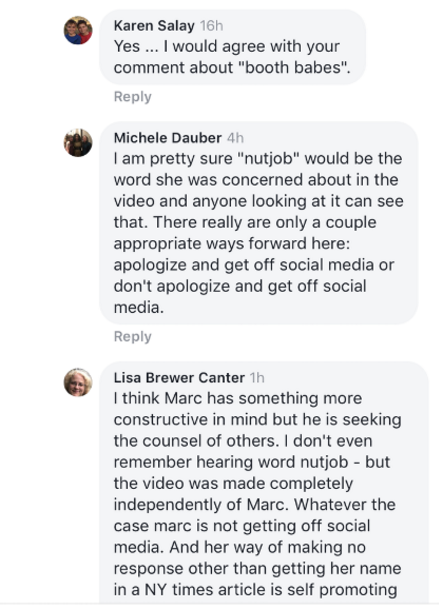 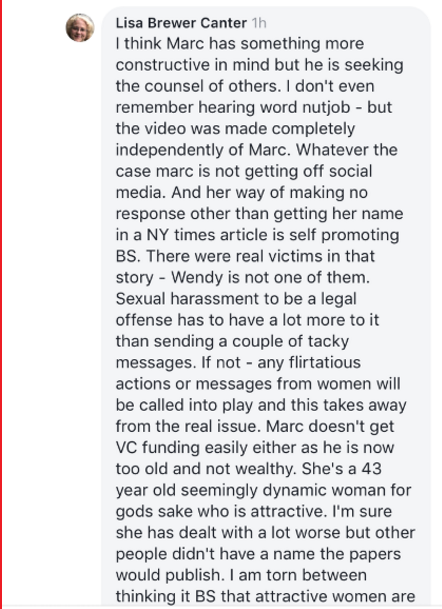 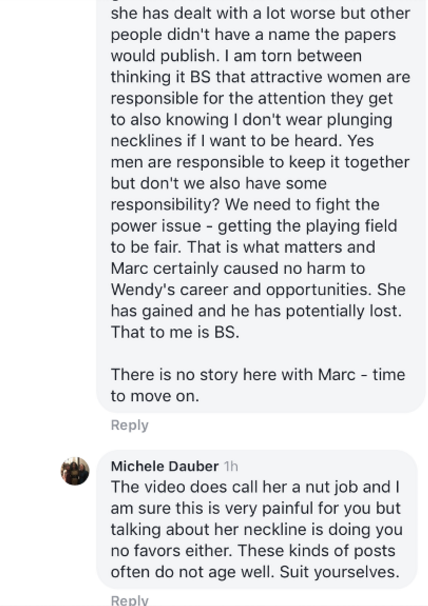 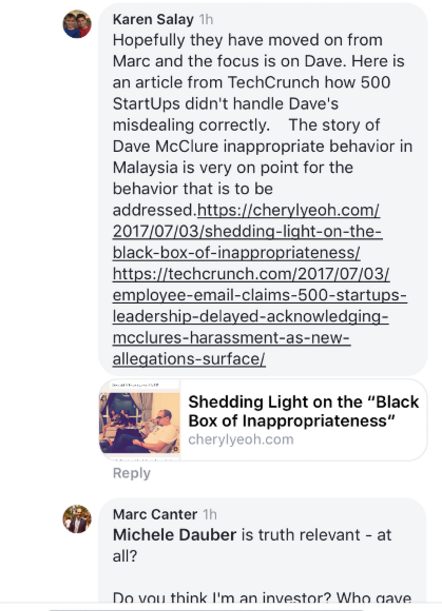 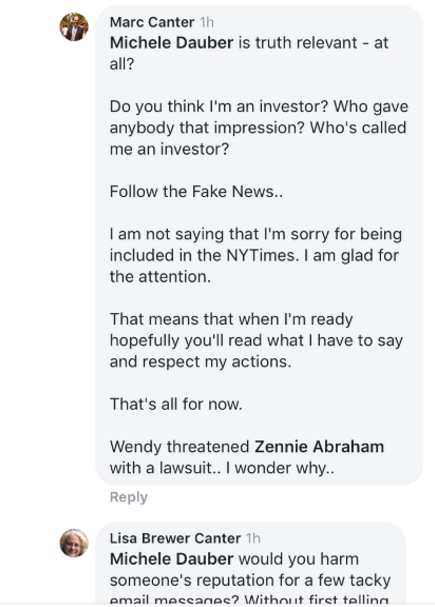 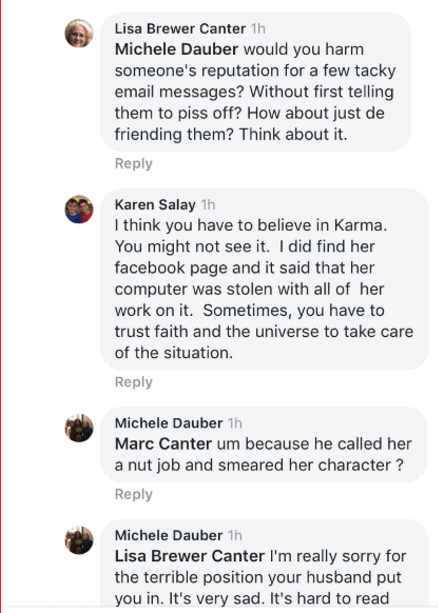 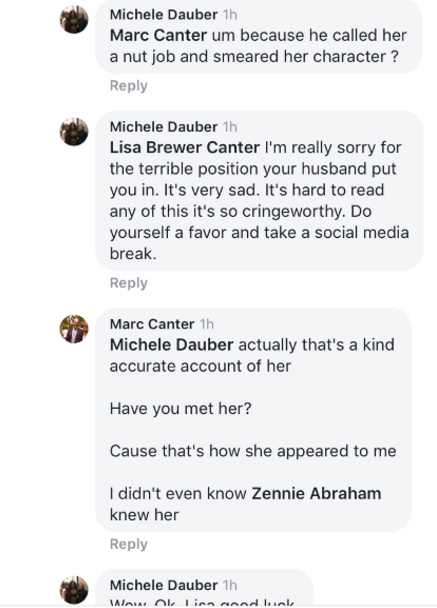 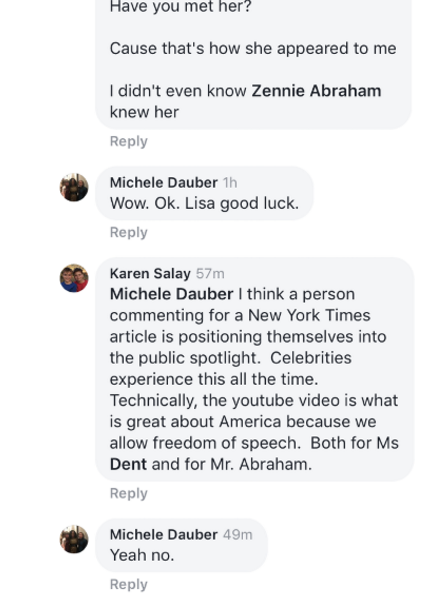 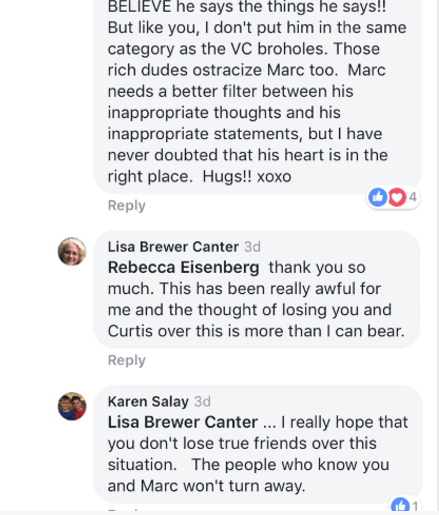 I thought Pando prided itself on its journalistic standards and practices?
I have always seen Pando as a shining light - for truth, honesty and integrity - so please give me the modicum of decency before jupning to conclusions and taking things out of context.
Here are a few ?????'s you need to be asking yourself:

Who said Marc Canter was an investor?  Find that lie and we're getting somewhere..........
Why was Marc chosen to be part of the NYTimes article on Dave McClure and Chris Sacca?  To put me in the same category as McClure and Sacca is............ - who decided that?
What prior history has Marc shown for un-filtered, brash statements - in public?  Ever hear of the Identity Gang?  Data Sharing Summit?  Ourmedia.org?  StructuredBlogging.org
What efforts has Marc done - over the past 15 years to help user's, entrepreneurs and society in general?

What female CEOs is Marc helping and has helped - recently?  Interviewed them?

What did Marc do in the 1980's?  Why did John Doerr kick Marc out of Macromedia?

It would seem to me that if you think my wife's defense of me - is a story - than perhaps you need to do a little RESEARCH!  You owe that much to me!
Based upon the new set of guidelines issued by TechCrunch:

....my unconventional, off-handed remark to Wendy Dent to get rid of her - was barely a level A.  I did not approach Wendy, and I am NOT an investor.
I did NOT agree to help Wendy - but her goals sure have been fulfilled.  To call Wendy a "victim" is not as true as calling her an "accuser."
I am preparing a statement vis a vis all this - including the Fake News aspects and my wife's latest comments.
Stay tuned.............

The question is: "Will Pando Daily be known as a publisher who takes sides - or do I get my day in court?"