In a stunning reversal of power, it’s long marginalized women who are now in control of the industry’s future.
By Sarah Lacy
Jul 17, 2017 · 9 minutes

This morning, Bloomberg reported that Fred Destin, formerly of Accel and Atlas Capital, is having difficulty raising his new $100 million fund because of questions that have surfaced surrounding his treatment of women.

The story cited by Bloomberg involved his making advances on a woman at a tech conference, who says she was pitching him about her startup. Bloomberg reported Destin giving the familiar excuse: “He thought they were interacting in a non-business situation.”

Nevermind, it was at an industry event, and she was a founder raising money, and he was a VC. Remember Dave McClure said the same of Sarah Kunst despite texting “I was getting confused figuring out whether to hire you or hit on you.”

What LP’s decide in the case of Destin will be a major test for an industry that failed to do proper due diligence on Binary Capital’s Justin Caldbeck who was a known predator to his partners at Lightspeed and his future partner Jonathan Teo before raising capital.

This is on top of the bombshell allegations this past weekend about BetterWorks CEO Kris Duggan. Bloomberg has just reported that scandal has put a hold on a book that was in the works by Duggan and John Doerr.

And that comes on the heels on the news that Ignition Partners managing director Frank Artale has quit that firm over allegations of “misconduct.”

While a lot of the furor in the tech press on these cases is dying down, the national press is pouncing on the story with both NBC’s Megyn Kelly and CNN’s Laurie Segall hosting interviews with multiple women who have spoken out about their experiences of harassment and assault in the Valley.

We’ve now had four weeks of steady allegations coming out about bad behavior in the startup world towards women, all coming after the most untouchable bro in Silicon Valley Travis Kalanick was forced to step down from Uber.

The shock isn’t that there’s so much coming out. It’s that it’s having an impact. Binary Capital is gone, Dave McClure is out at 500Startups, and the fund’s future is in question. Bloomberg reports LPs saying they may not fund Destin as a result of these allegations, and a postponed book is likely only the beginning of ramifications for Duggan.

But while publishers and LPs appear to be the ones holding these folks accountable, really they are just being reactionary. One group has made this happen and one group has the power right now to keep this movement going, and force real change in tech: The women in this industry who are coming forward, particularly those doing so on the record and on camera.

Last week, CB Insights did a poll of its newsletter base of nearly 300,000 people in the startup industry asking whether things were really going to change this time. The depressing headline is that only 10% of respondents (including me, by the way) said that this time it is different, and meaningful change was going to happen for women in tech. 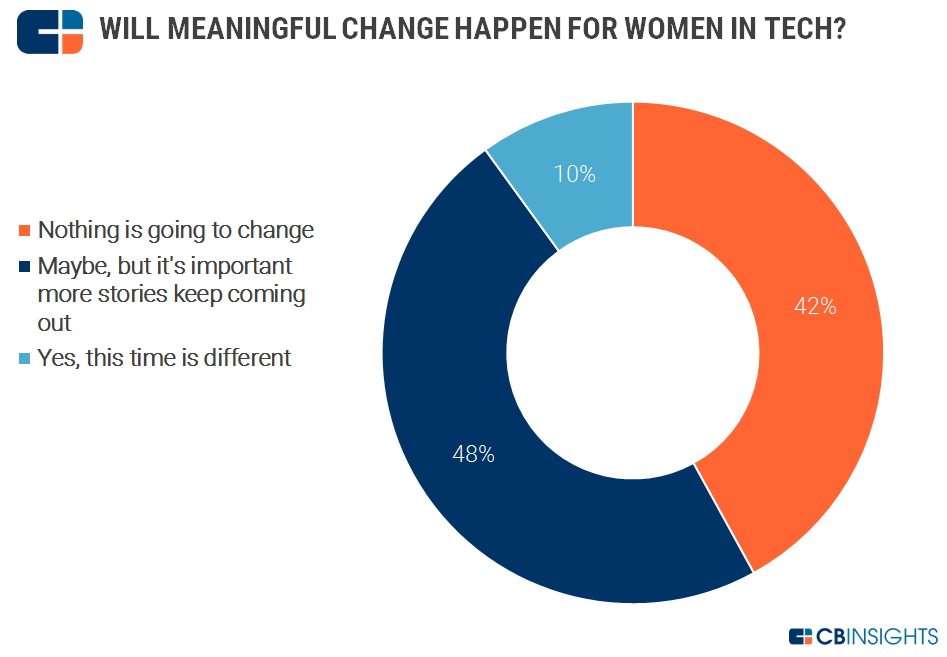 It’s all in the hands of the women in this industry who for so long have felt a total lack of agency when it comes to powerful men making advances on them. This is a stunning reversal of power. One that I said in a recent keynote was the popping of the toxic masculinity bubble, that could lead to a crash unlike the Dot Com Bubble or the financial crash of 2008: A morality crash in Silicon Valley.

This goes well beyond the treatment of women and to the core of the "disruption" era where founders have had little to no accountablity and have been rewarded for breaking laws. It's an era that ushered in allegations of Uber employees stealing major trade secrets from Google, Zenefits similarly breaking the wrong kind of laws, scandals around honesty at Theranos that have hobbled the company, and scandals around honesty at Hampton Creek that have now lead to the entire board resigning. As Erin Griffith detailed in a December piece about the rise of fraud at Silicon Valley's unicorns, when allegations first came out in almost all of these cases, Valley royalty like Vinod Khosla, Tim Draper, and Y Combinator's Sam Altman slammed the press as publishing nothing more than "slam piece[s]" or pooh-poohed the concerns saying things were going great at these companies. (Smearing the press without evidence is a pattern for Altman.)

While it's the founders who should be held responsible in these cases, the board and venture industry have clearly enabled the toxic rot of "faking it 'til you make it" and "asking forgiveness, not permission." As Joan C. Williams detailed in her piece about why sexual harassment is particularly bad in the startup world, there is a link between the bro-world's "Pursuit of masculinity" chasing bigger returns, bigger valuations, bigger risk, and exploiting a power imbalance over women.

Long time serial entrepreneur Francine Hardaway wrote on Facebook this morning about the position of power women are in now, and how different it was from earlier waves of feminism in tech. The piece was a sobering look at how far we have come even before this last week:

We haven’t even gotten to my “angel” investment in New Times, later Village Voice Media, and GoVideo, where I got a 50x return. That’s how I discovered that investing made even a woman powerful.

Nor to the first of my marketing companies, Hardaway Connections. Nor to the bulk of my business dealings with men, during which I discovered that sex is also a powerful tool — for women who know the rules and aren’t afraid to level the playing field by using it. It’s never about the sex. It’s about power.

Yes, I used sex as power. I slept with clients, partners — basically anyone I wanted to sleep with. My rules? Don’t get pregnant; don’t ruin anyone’s marriage. And don’t do anything I didn’t want to do.

How did I learn these rules? From the men around me. I saw the way the game was played and decided to go for the goal. I don’t ever remember feeling harassed, violated, or at a disadvantage. If that was the game, I was in. I just didn’t want to hurt anyone, and as far as I know I did not. Many of the players aren’t here anymore, but I’ve never left a marriage or a relationship on bad terms.

Which brings me to the current situation in the tech industry. You women stepping forward now are standing on the shoulders of the women of the 70s, who fought for the basic rights to work at occupations reserved for men and took women far enough that you women now have the liberty to make a different set of decisions about how you will play the game. You’re fighting to get funded equally, and paid equally. That’s light years ahead of where we were.

In my day, I played to win — by any rules. I did not have the right or the power to change the rules. You do.

What has made sexual harassment from VCs so devastating for women is that until now, there seemed absolutely no way to hold anyone accountable. Cheryl Yeoh, who detailed advances made on her by McClure, has said the change in agency, in the potential for impact is why she finally came forward now. What’s more: She did it less for retaliation and more to ensure other women weren’t victims in the future.

From an article published yesterday:

"Given that nobody at 500 Startups had the power to fire McClure (the cofounder), an official complain to 500 Startups didn't seem to make sense," she said.

"Now that the industry is finally waking up to a series of other public sexual harassment cases at Uber and Binary Capital, VC firms are taking this more seriously and hearing victims out," she added.

That was the same motivation of Niniane Wang, Susan Ho and Leiti Hsu in coming forward to talk about Justin Caldbeck’s advances on them. Said Ho to me at the time:

“Leiti and I originally were not going to say anything because we felt that what happened to us was just unfortunately so commonplace and trite these days...

“But after hearing the stories of other women who endured much worse, we decided we had to say something to make sure this article would get written. Niniane Wang was the first to agree to go on the record and she said it best — if we don't say anything and this happens to someone else, it's really something we could have had a hand in preventing.”

Let these brave words ring in your ears. Because whether more women are thinking them right now or not will determine the future of the venture capital industry.

That sounds hyperbolic, I know. But it’s impossible to overstate the seismic cultural shift in an industry where women thought there was no point in coming forward to women coming forward now and seeing almost immediate results.

Most women I know have spent the last month doing their own “inventory” of sorts: Can I count the times this happened to me? Should I have come forward? Should I come forward now? Have I normalized this? Has that normalization inadvertently hurt other women?

For some, this “inventory” started in the final days of the Presidential election. As women online started sharing stories of sexual assault, Julie Hanna told me in a podcast:

One hundred percent of the women I know have experienced sexual harassment...I came up with half a dozen incidents in my career, all but one in the workplace. I thought, ‘Have I normalized this?’ We keep it in the dark. One was with someone who was an investor and this person was one of the most powerful, well-known men at the time, and I felt powerless to do anything about it. My even telling you this is a massive shift. I would have never considered doing this.

I spoke to another senior woman last week who told me she could count thirty major instances of sexual harassment in her career, and far more minor instances of this kind of behavior. There is so much more that can come out that hasn’t yet.

In a month’s time, the entire venture capital industry has gone from a near certainty that no one would ever lose a job or a fund for propositioning a woman in a quasi-professional setting to being on notice. The venture industry is sitting on a powder keg and in a stunning reversal of power, it’s the women they marginalized for decades who are controlling the match.

And, according to CB Insights’ poll, nearly half of the industry knows that and is just waiting to see what comes out next. It’s only 42% of the industry that believes men treating women this way are safe.