We all know this will end in tears, it’s just a matter of how long late stage investors can delay it.
By Sarah Lacy
Jul 18, 2017 · 8 minutes

Venture capital is in a weird place right now.

The same week that Mitch and Freada Kapor wrote a post wondering aloud if the venture industry could “be saved,” the second quarter numbers came out. And guess what? They were huge.

According to CB Insights and PriceWaterhouse Coopers, funding rose 27% from the previous quarter while the number of deals completed fell 4%. For those wondering if 27% is “a lot” I’ll note that’s roughly three times Uber’s self-reported quarterly growth-- off of smaller numbers. And Uber is the highest valued company in this ecosystem, the largest bet in a lot of large bets that tens of billions of dollars keep making quarter after quarter.

Not surprisingly, the quarter was dominated by mega rounds: 31 rounds of more than $100 million each, the highest since peak mega-deal frenzy of the third quarter of 2015. Nine new unicorns were created, the highest amount since that same frothy 2015 quarter, when 16 were minted.

Deal activity in San Francisco, actually pulled back, with a 23% decline in deals, year-over-year. Meanwhile, funding surged globally. Asia doubled its funding from the previous quarter.

Asia’s stunning 103% increase in fundraising made it a larger recipient of venture funds than North America for the first time. Sure, that was artificially inflated by Didi’s monster $5.5 billion round. But we’ve now had several years of saying quarters were artificially inflated by the new record breaker in terms of amount raised or valuation. When mega deals are the several year norm around the world, it’s hard to keep dismissing them as things that skew individual quarters.

There is a lot to take away from all these numbers.

It’s tempting-- and we’ve fallen into this trap before-- to see some of these disconnects as a harbinger of bad times to come. In the past, when funding amounts keep increasing, but the number of deals decrease, its a sign that investors are losing confidence in the system, plowing money into the companies that have the best shot, while pulling back on anyone else. But we noted that trend years ago, and no big correction or crash came.

Some may also note that in the wake of the dot com crash, funding pulled back at the epicenter of Silicon Valley first, and it took a while for the message that times had changed to ripple out globally. So here again: A harbinger that it’s surging so much in Asia while contracting more here?

Nah, as we’ve elsewhere detailed everything about Asia’s position in the startup world has changed, dramatically. Much of the global mega-deal volume that’s still pumping up startups (and their valuations) in the US is actually coming from Asia. Meantime, Asia’s largest unicorn, Didi, has trounced our largest unicorn, Uber not only in China, but in terms of ride volume generally, and likely in terms of valuation once Uber raises again.

It’s also tempting to look at a re-surge in unicorns and mega deals, and look at the flailing public company lives of Snap and Blue Apron, and the arguably overheated decacorns like Pinterest and Dropbox who keep putting off an eventual valuation reckoning and think…. Well this can’t end well.

But, well, we’ve been saying that for years too. The truth is a lot of the very early investors in these companies -- the actual venture capitalists--  will make money no matter what. It’s the late stage folks that will take a drubbing, and a lot of them have put such onerous terms on these companies that it’s really the employees who will take the biggest hit.

In January publication after publication said 2017 would be the year we’d finally see exits. Eh, not so much. Kevin Kelleher wrote earlier this month that Blue Apron’s lackluster IPO had capped 2017 as the year of “IPOs as the last resort.” And it’s only gotten worse for Blue Apron since. From an Edison Research report out today:

The saga of Blue Apron is rapidly becoming a horror story that could end in acquisition as rushing to IPO too early has now made it extremely difficult for the company to raise new money...

The problem is that Amazon clearly intends to stomp on these businesses with its acquisition of Whole Foods and its application for a trade mark to enter this line of business. This has decimated the valuation of Blue Apron and, we suspect, sent waves of panic through Hello Fresh.

Prior the Whole Foods announcements, Blue Apron was expecting to IPO at $15-17 per share and as of the close of trading on 17th July 2017, the shares were valued at $6.59 some 59% below where it was just a few short weeks ago. The bigger problem is that Blue Apron has massively ramped up both operating and capital spending ahead of its IPO.

In Q1 17 Blue Apron lost the same amount of money that it did in the entirety of 2016 and also spent $50m on capex which it financed by raising debt.

Hence, after paying off the debt, Blue Apron has around $250m in the bank which is not going to last very long with losses running at $50m per quarter. It either has to generate profit soon (unlikely) or raise more money. This is going to be extremely difficult because with the share price 59% below where it was expected to be and Amazon coming head-on, no one is going to want to finance the company...

We see no bargain to be had and would steer well clear of this.

(And also, we told you so. We have argued for more than a year that Blue Apron was fundamentally flawed and should sell to Whole Foods immediately. Too late now, I guess.)

VCs are trapped between two nightmare scenarios when it comes to these hundreds of unicorns being forced-- one day-- to go public. Either they go full-on Bill Gurley and try to force these companies out, because they believe that life with access to unrestrained private capital with no accountability… well, rots the core of a once promising company like Uber. (Which, by the way, Gurley is reportedly trying to cut side deals to get out of ASAP...)

Or they look at Blue Apron and Snap and say…. Well, going early in the hopes that the rigor of being a public company would make these CEOs stronger didn’t work either. Everyone points to Marc Benioff and Mark Zuckerberg making those arguments about the benefits of going public. Yeah, because ultimately they had much stronger companies.

Fundamentally, it’s a question of: Do you have a company that is well-valued in relation to its actual business, growth, and potential for profits. If no on any of those, being public is brutal in the short term, but being private may well be just as disastrous in the longer term.

It’s a similar case for the VCs behind these companies: Early investors want to lock in returns while they can, especially considering growing fears of a bear market for anyone who isn’t part of the “FAAMG” gang.

From Kevin’s piece a few weeks ago:

The companies struggling are the smaller ones competing against the formidable FAAMG. SoundCloud is up against rival services from Apple, Amazon and Google. Jawbone's fitness trackers compete not just against Apple Watch, but also the Apple ecosystem it belongs into.

In July 2017, Silicon Valley resembles a small town where two very different communities live on separate sides of the tracks. There are the FAAMGs, residing in their opulent mansions on the hill, and there are the other companies that are struggling to make ends meet, sometimes wondering how they'll get through the year…

The old-fashioned notion of tech as a growth industry – where growing revenue leads to a) growing profit, b) growing market share, or c) both – is still alive and well. It's just limited to the sunny side of the railroad tracks. Meanwhile, a lot of tech companies are bringing in plenty of revenue, but either that revenue isn't growing very quickly - if it's growing at all - or companies are having trouble distilling that revenue into profitability. 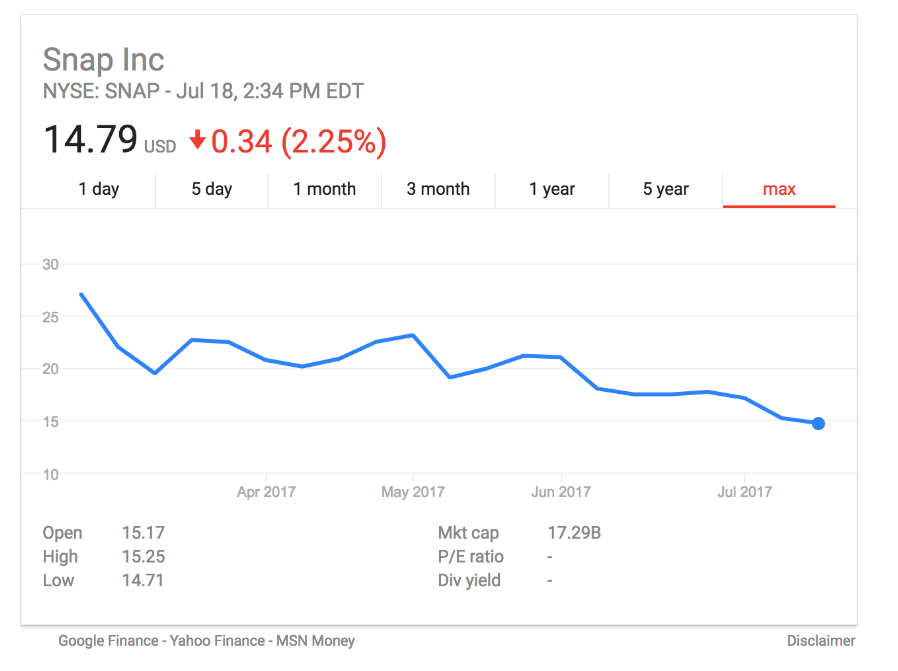 ...how well is your unicorn going to do in the public markets?

These early stage investors don’t so much care about the fall from a late stage valuation. Bill Gurley, for one, is financially just fine with Snap’s falling stock price…and will make money on Uber presumably no matter what new scandal hits next. But those who invested later, still get to have the paper gain-- which can matter if they are raising a new fund themselves.

We can go on and on about the disconnect between a public market that doesn’t even like Snap-- arguably the most exciting consumer Web company to launch in the last eight years-- and the second quarter numbers which show late stage investors simply don’t care about that disconnect and are doubling down on this unicorn mega-deal strategy no matter what.

No private market correction has come or appears to be coming anytime soon. Again, none of that is news. We’ve all been writing this same story for years now.

Here’s the new twist: What is news is that these companies are starting to fail despite lavish private equity funding because they’ve brought it on themselves. After the fall of Travis Kalanick, women, non-bros, and other marginalized group are sick of bro culture and aren’t gonna wait for the economy to shake these crap out of the system.

The second quarter venture numbers only reaffirm my stance that this crash will be about self-inflicted, unchecked, law breaking bad behavior in the startup world, not economics.