The $199 billion problem: Ten US companies that could devastate Silicon Valley

Earlier this month-- while we were all still fixated on bro-gate-- Pitchbook put out an interesting report on WeWork’s unimaginable new $20 billion valuation.

We’ve were flummoxed by WeWork’s valuation billions of dollars ago. Pitchbook attempted to put some perspective on just how big of a jump in valuation that was for a company that has had it’s own bro scandals and deals in the nitty gritty of hard to scale real-world office space.

QUOTE WeWork’s latest round, a massive $760 million funding reported earlier this week, has increased the valuation of the co-working space provider by about $4 billion. With VC-backed companies crossing the $1 billion threshold at a pace of around one per week, it’s easy to take in a jump of that magnitude without batting an eye.

But let’s put the $4 billion increase to WeWork's valuation in context with a few points of comparison:

It reminds me of the time we screeched that the delta between the announced price for Whatsapp and the actual price based on the share fluctuation was worth three Goddamn Instagrams.

Looking at this chart of the five highest valued private tech companies in the US right now….. 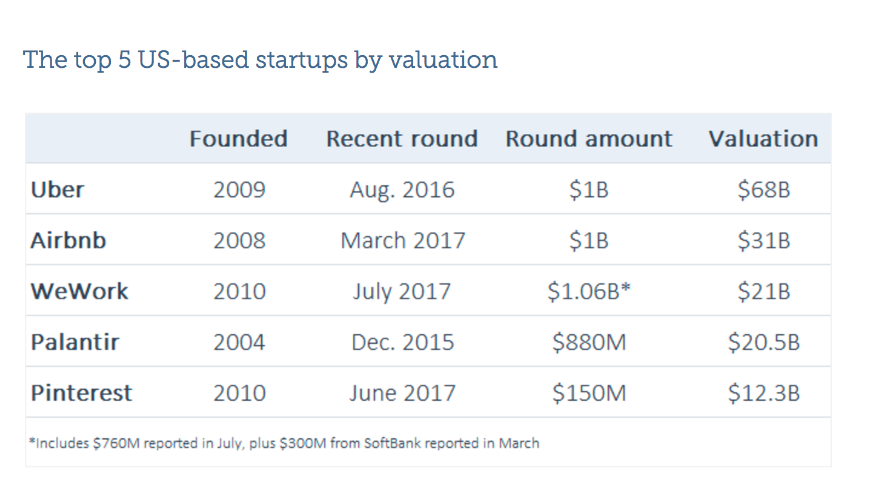 Arguably all these companies are overvalued. Of the list, I’m the most bullish on Airbnb. It’s actually profitable, has pretty decent penetration globally, and is not a commodity product, unlike Uber. And yet, bullish as I am, even $31 billion for global room rentals seems steep, and moving beyond that is hardly proven.

And growth is said to be slowing. While there may be a far larger base of people who want to stay in other people’s homes, there is some natural limit to how many people want strangers in their homes. At some point, Airbnb will face an inventory issue. Now, people have said this all along. Who would let strangers stay in their home? The number is larger than most of us expected. But that doesn’t mean it’s, say, Facebook-sized, which is why Airbnb is working to expand services and become more of a full service travel company.

Beyond that, a few things occurred to me, looking at this list.

- The sheer scale of how overvalued Uber is. Uber is almost worth as much as Airbnb (a far stronger company based on the fundamentals), wildly overvalued WeWork and mysterious Palantir combined.

Unlike any of those other companies, Uber is being investigated by the Department of Justice, is battling a major legal battle with Waymo that threatens the future of Uber’s business, is burning $4 billion a year and still growing at a slower rate than other Web titans (off far smaller numbers), is a commodity product, has not done well in other major markets around the globe, and -- oh yeah-- has basically no C-level officers left.

On the basis of sheer greed, would you rather be a shareholder in Uber or all of those three companies right now? Even throwing in overvalued WeWork, I’d pick the latter.

- Joan Williams words about bro-culture confusing the accumulation of wealth with the accumulation of masculinity keep ringing in my ears. It isn’t a shock that four of the five highest valued companies-- maximized only to have the gaudiest valuations no matter what it may do to the future of their companies or the eventual paydays of their employees or the morale of the team, should there be a down round-- had bro-co-founders.

Uber’s bro chops are obvious. Airbnb has matured a great deal, but it’s described by many as having a “bro culture.” It’s founder CEO Brian Chesky was a former professional bodybuilder. He’s only not a bro by comparison to the rest. WeWork? Well look at these stories. And Palantir is co-founded by Joe Lonsdale.

Lone Pinterest has had a standout record driving towards diversity. But if Snap hadn’t gone public, Evan Spiegel -- with his college emails and racist product scandals-- would have been number five.

This list-- sporting several of the largest private company valuations in SIlicon Valley history-- proves Williams point: “Work becomes a masculinity contest (to borrow Jennifer Berdahl’s term) in which men become obsessed with showing that theirs is the biggest — the biggest deal, the longest hours, the most money.”

If you buy either of those arguments: Investors have some $140 billion reasons the bro-economy can’t be shut down.

Intrigued by some of these patterns, I asked Pitchbook for the next five highest valued US startups.

-A tie between Dropbox and SpaceX at $10 billion each

Before its disgrace, Theranos ranked ninth. Let that sink in: This list has only had two companies “exit”-- one into an IPO that rewarded investors and employees, but ultimately may have thrust Snap into a Twitter-like valuation trap. The other is utterly disgraced. Arguably, neither has built a sustainable business worth this amount. And so far everyone else is a big question mark. A $199 billion question mark. If these ten companies alone go the route of Theranos, that could cause more damage in the Valley in terms of evaporation of paper wealth and cultural devastation than if 200 regular unicorns went bust. If these ten companies “succeed” like Snap did, then a lot of people will make money, but we won’t necessarily have a new FANG. Welcome to TwitterX10.

At least the list of the second five at comparatively reduced prices looks slightly more defensible:

To me, SpaceX is the only one of the ten that seems to have a reasonable price.

These are all private companies, so there may well be surprise upsides I don’t get. And I’m sure one or two will become large companies. But if they go public, how many will wind up in a valuation trap like Twitter and possible Snap? Worth something sure. Worth a lot even. But unable to be acquired because of how steep their valuation once was, destined to just Yahoo out?

These are billed as high growth companies. So for WeWork, Airbnb, Uber, and Palantir, to go public, there has to at least be a path to building a sustainable public company worth at least $30 billion. (Indeed for Uber, that would be a significant down round, cutting its valuation by more than half.)

I went through a spreadsheet of some 700 current publicly traded tech companies. Guess how many I saw that had been founded in the last twenty years that were worth at least $30 billion? Seven: Google, Amazon, Netflix, Facebook, Salesforce, eBay, and vmware. Even LinkedIn sold for “just” $26.2 billion and was an enormous success. Netsuite was one of the biggest winners of the first wave of SAAS and it sold for “just” $9.3 billion.

Admittedly this doesn’t include companies that were one-time valued at more than that….

But even that list is a relatively short one. And none of these companies can count on a stock market as frothy as the dot com bubble to lift them. (Ask Snap and Blue Apron.)

The bullish argument for why so many more companies are valued at north of $1 billion than have ever historically exited for that amount is that globalization and mobile have made the markets so much bigger. That may well be the case. But there are a few flaws with that argument.

For one thing, you can’t argue global growth markets are the reason higher valuations are justified and assume US companies will all be the biggest winners. Already China is home to several of the world’s largest Internet companies, and Didi Chuxing’s ride volume dwarfs Uber’s. Uber has given up on Russia as well. And South East Asia’s Grab is announcing another record breaking deal today, with Softbank and Didi taking another “multibillion dollar” stake.

We may well see more $1 billion exits than we’ve seen before. But that doesgn’t mean we’ll see four or more companies worth $30 billion come out of this wave, when only seven tech companies founded in the past 20 years are in that category now.

And even if we did: Would this list of companies be the ones? Yesterday, Alphabet announced earnings with revenues at $26.01 billion, up from $21.5b last year. This is 13 years after Google’s IPO, long after it has put fears to rest that it was a one-trick search pony. We are only now hearing genuine analyst concerns that core growth might be slowing.

So far, Snap is the only decacorn to deliver a decacorn return, and it couldn’t even manage that for two quarters.