What Silicon Valley keeps getting wrong: That "hater" was supposed to be your user

Silicon Valley should be a counterpoint to the hate and divisiveness and the lies of a Trump America. And yet...
By Sarah Lacy
Sep 13, 2017 · 10 minutes

Back in March, I wrote something about Silicon Valley’s soft power in the world eroding.

It touched on the disconnect between the growth in users and how users increasingly feel about using some of Silicon Valley’s biggest products. About how companies like Uber and social media giants driving wedges in relationships and causing people to seek therapy are becoming something akin to a new cigarette: Things we can’t stop using, but are increasingly not happy or proud of using.

And how data obsessed companies in the Valley are missing that distinction.

Indeed, there’s even the depressing narrative over how people who are helping build these companies are treated. Never mind the summer of disgusting accounts of sexual harassment - spare a thought for those who aren’t lucky enough to be in the executive ranks of these companies at all.

In the early days of Silicon Valley, one of the innovations was treating employees so well, giving them equity, eliminating a sense of hierarchy so that they wouldn’t want to unionize. Robert Noyce felt unions had put employees and employers at odds in the Midwest and he wanted companies like Fairchild Semiconductor and Intel to do better.

Fast forward to Uber, a company that has been fined by the government for making false claims of potential earnings to entice drivers into its network. A company that has trapped drivers in predatory leases, giving them little choice to do anything else. A company that forces drivers to make up a living wage on volume, so much so, that they camp out in parking lots rather than go home to their families.

It may not be nearly as egregious as Uber, but The New York Times recently published an amazing story contrasting the difference between a janitor at Kodak and Apple, to explore how the Valley’s contractor culture has worsened inequality in the US.

In the 35 years between their jobs as janitors, corporations across America have flocked to a new management theory: Focus on core competence and outsource the rest. The approach has made companies more nimble and more productive, and delivered huge profits for shareholders. It has also fueled inequality and helps explain why many working-class Americans are struggling even in an ostensibly healthy economy.

The $16.60 per hour Ms. Ramos earns as a janitor at Apple works out to about the same in inflation-adjusted terms as what Ms. Evans earned 35 years ago. But that’s where the similarities end.

Ms. Evans was a full-time employee of Kodak. She received more than four weeks of paid vacation per year, reimbursement of some tuition costs to go to college part time, and a bonus payment every March. When the facility she cleaned was shut down, the company found another job for her: cutting film.

Ms. Ramos is an employee of a contractor that Apple uses to keep its facilities clean. She hasn’t taken a vacation in years, because she can’t afford the lost wages. Going back to school is similarly out of reach. There are certainly no bonuses, nor even a remote possibility of being transferred to some other role at Apple.

Yet the biggest difference between their two experiences is in the opportunities they created. A manager learned that Ms. Evans was taking computer classes while she was working as a janitor and asked her to teach some other employees how to use spreadsheet software to track inventory. When she eventually finished her college degree in 1987, she was promoted to a professional-track job in information technology.

Less than a decade later, Ms. Evans was chief technology officer of the whole company, and she has had a long career since as a senior executive at other top companies. Ms. Ramos sees the only advancement possibility as becoming a team leader keeping tabs on a few other janitors, which pays an extra 50 cents an hour.

They both spent a lot of time cleaning floors. The difference is, for Ms. Ramos, that work is also a ceiling.

Damn. A Silicon Valley shocked that America could elect Donald Trump President has smugly spent 2017 talking about how they could share all the answers and riches we have here with all those displaced Americans. There’s little awareness at how much Silicon Valley is the one doing the displacing.

And then there are the tens of billions of dollars in valuation bet on the “on demand” economy. If you are middle class this is a great way to get whatever you want at the touch of a button! If you are not, it’s a great way to become a digital serf doing the chores and bidding that well-off urbanites don’t feel like doing. All subsidized by millionaires!

Silicon Valley: You are losing at the PR game. And given the biggest home runs are consumer businesses with massive customer bases, this is going to be a problem. At some point, it won’t be enough that your products are addictive. People will have to feel good about using them. People will have to believe in America’s innovation engine again.

Consider: Juicero. I’ve spoken to people who were stunned at the level of grave dancing when the company went out of business. But remember, the company’s petulant reaction to Bloomberg’s account of just being able to squeeze the bags without a $400 machine? We all just didn’t get it.

“The value of Juicero is more than a glass of cold-pressed juice. Much more.”

Or not. The company shut down a few weeks ago.

Optics 101: Don’t post a picture from Burning Man just after your company has burned through $118 million for a product that a lot of people thought was stupid. You are asking for it.

Did anyone learn from that? Any introspection on the part of those who flooded the company with capital? Nope. Instead, investors blamed the company’s demise on “populism”

Several investors also say they felt Juicero was a victim of an anti-elitist political and media climate.

Even if it were true, you’d think if they worried about the impact of such an “anti-elitist political and and media climate”, they’d have learned. Nope.

The Internet is a flame today with arguments for why urbanites -- especially moms and people of color-- do not want their Bodegas to go away. They are an important fabric of a neighborhood, keeping it safer by staying open late, keeping an eye on the neighborhood, acting as a focal point for local businesses to interact with residents.

Just as people didn’t want to pay for a machine to squeeze juice out of a bag, many people don’t want a machine to replace their Bodega. Memo to smug investors and entrepreneurs whining about people “not getting” you: Your haters are your would-be users. People “not getting you” is fine when you are producing indie films. It’s not so great when you are raising millions-- let alone a hundred millions-- of dollars to build a mass-market consumer product.

It’s not just that these businesses may miss the mark for some, it’s the “let them eat cake” arrogance of disruption in the marketing that makes the Valley look like no one has ever struggled a day in their life, lived in real urban America, had to race out to a corner store at 1 am for milk or diapers or tampons or cold medicine.

Did you all just have people to do that for you?

Do you have so much money that you can blow hundreds of dollars on a machine that squeezes juice out of bags?

On one level, I feel for the founders getting pummeled in these cases by the Internet mob, as someone who has been unfairly pummeled by it a lot. On another, good lord, get better PR and marketing, because there is a reason the mob keeps reacting this way. It is you, not them.

Bodega has issued its obligitory Medium post, which categorically says it does not want to put Bodegas out of business..... despite explicitly saying that to Fast Company.

From Fast Company: "Paul McDonald, who spent 13 years as a product manager at Google, wants to make this corner store a thing of the past."

From Medium: "Challenging the urban corner store is not and has never been our goal."

No explanation in the post of this discrepancy. So either the company is being disingenuous in the face of an outcry, or it is saying Fast Company wildly misquoted it, without explicitly saying that. I guess it's up to us to decide. A botched press roll-out is one thing. A company choosing to be disingenuous on top of it is more problematic

Then there is SoFi, the third unicorn where reports of rampant sex and sexual harassment at company events, in the office, or between co-workers, this time coming directly from the CEO.

Worse: There is SoFi’s response to these stories, not a mea culpa or a strong message of change, but a vague denial of “inaccuracies” and statements about what they can’t respond to in the piece, ending with this:

The story did mention our business performance, and indeed, SoFi is thriving. Since inception, we have funded more than $20 billion in loans, $3.1 billion in the second quarter alone. In Q2, we had $134 million in revenue, up 67% year over year, with adjusted EBITDA of $61.6 million, up 60% year over year. We have more than 350,000 members, and they like what we do – our products run Net Promoter Scores in the 60-80 range, among the highest in financial services.

In the words of investor and entrepreneur Susan Wu via Twitter: 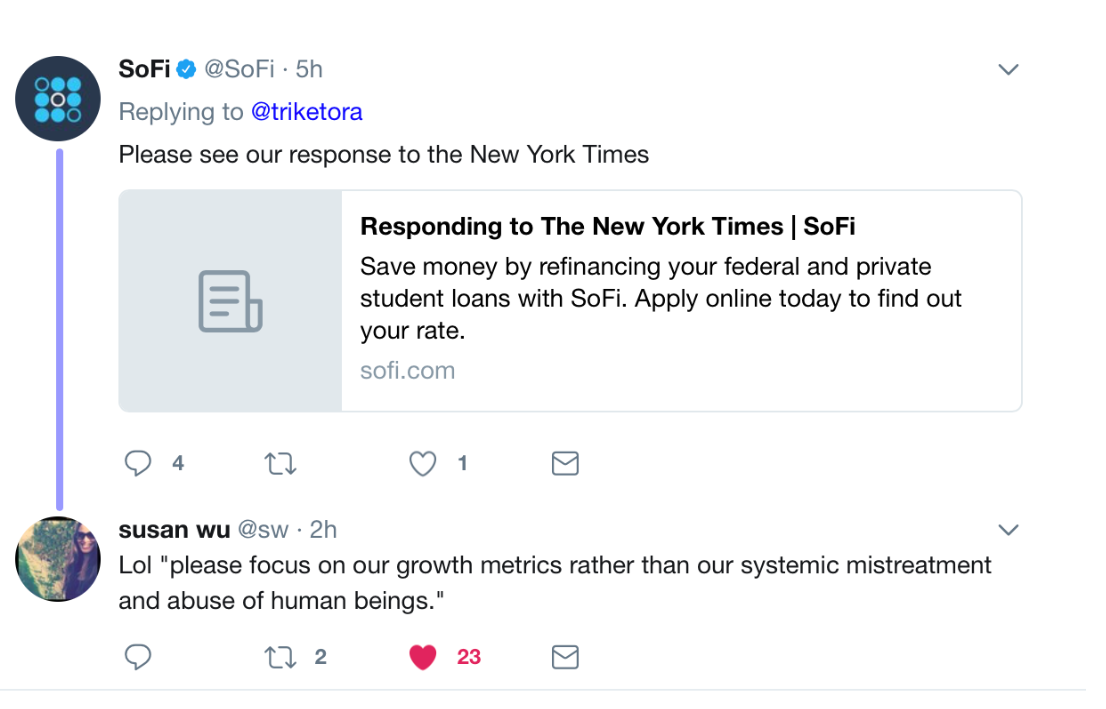 And then there’s Facebook. A company that less than a year ago scoffed at the idea that it could have impacted the US Presidential election, has now admitted that:

In reviewing the ads buys, we have found approximately $100,000 in ad spending from June of 2015 to May of 2017 — associated with roughly 3,000 ads — that was connected to about 470 inauthentic accounts and Pages in violation of our policies. Our analysis suggests these accounts and Pages were affiliated with one another and likely operated out of Russia.

We don’t allow inauthentic accounts on Facebook, and as a result, we have since shut down the accounts and Pages we identified that were still active.

Only Facebook did allow these “inauthentic accounts” to exist, and is resisting releasing any more information about them. That’s caused even techies like Pierre Omidyar have turned on Facebook in light of this, demanding via Twitter that the company do better. (And yes, that’s rich given Twitter won’t enforce its own terms of service either when it comes to Donald Trump.)

Some people have liked to pretend enlightened Silicon Valley would be counterpoint to the hate and divisiveness and the lies of a Trump America. In fact, Silicon Valley, you’re soaking in it.