I’m still a little stunned at every part of how the Kevin Spacey story played out.

A man comes forward and says Spacey assaulted him when he was just 14 years old.

Even more astoundingly the media initially runs with the angle: Kevin Spacey comes out! Not, say, the allegations of sexual assault against an underage boy. Or, as it would turn out, boys.

The allegations were bad enough without Spacey turning back the clock on one of the most odious gay smears. And, at first, the media ran with it.

Enter Netflix, which is hardly Spacey’s only production partner, but certainly a significant one. It rapidly announced that it wasn’t going to do another season of Spacey’s “House of Cards.” A Netflix spokesperson explicitly said this had nothing to do with the allegations, it was long planned.

Now that — that!— was the one part of this whole thing that wasn’t a shock. House of Cards was long in the tooth so the truth is perfectly plausible, as is the case, they discontinued it for this reason but were allowing Spacey to save face. It certainly doesn’t hurt Netflix, as the show is getting cancelled nonetheless. They won’t be tarred or blamed, and there’s always the plausible deniability they secretly did the right thing, thanks to the timing of the news. In the “woke AF fall of 2017,” that certainly doesn’t make them look any worse than the other mega-elite tech titans who spent the week testifying before congress. Nor does it make them look worse than Amazon, who just fired Roy Price for his own set of sexual harassment allegations.

And yet, that wasn’t where the story stopped. That’s where it became somewhat unbelievable again. Having left a vague impression of why Spacey was throw off the Netflix Bus, Netflix paused and reversed over him a few times.

"Netflix will not be involved with any further production of 'House of Cards' that includes Kevin Spacey… We will continue to work with [Media Rights Capital] during this hiatus time to evaluate our path forward as it relates to the show."

I was in London when this news broke and was curious how it was playing the US. I saw a range of hot takes. One being that Netflix was backed into a corner. But it wasn’t. Netflix got out in front of this rapidly, in a way that distanced themselves from Spacey. No one was demanding Netflix do more. There was no #DeleteNetflix campaign. There was no groundswell demanding Netflix do more, because after all, he didn’t work directly for Netflix.

So what to make of Netflix bursting back on the scene a few days later, to explicitly throw Spacey under the bus— not only with the season of House of Cards currently in production, but any other Netflix projects? And what to make of the fact that in “woke AF 2017” this represents morality in tech.

We’re used to a few things when it comes to Netflix.

Reed Hastings famously started this company with the conviction he didn’t want assholes to work there. That alone in the post “Steve Jobs did it!” era was contrarian. He pioneered a seemingly crazy policy early on of unlimited vacation, which the rest of the industry only adopted once they had confidence that most people wouldn’t actually take it. Netflix offers the best family leave benefits in the industry— a full year, no strings attached, for men or women. Larger tech giants like Google and Facebook comparatively don’t come close, per this Chairman Mom infographic: 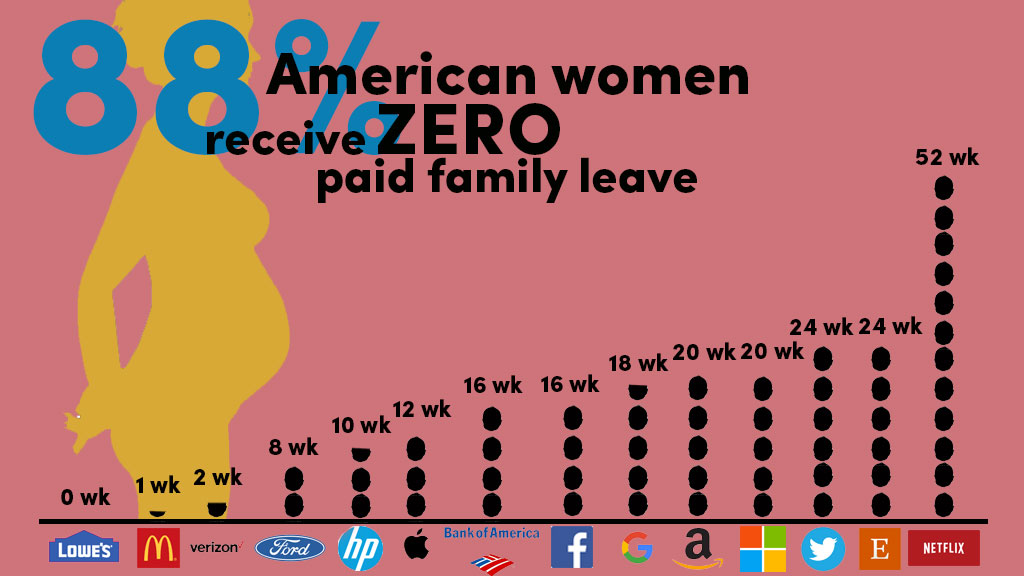 Contrast that to Apple’s colossal and epic new headquarters that has every amenity… except a day care facility. Contrast it also to the CRUSH IT! party culture of the bro-conomy. If there’s a story about Netflix executives partying with the CEO at a Korean brothel, it certainly hasn’t come out yet.

Then there is the growing fan base for Netflix’s in house legal team. When Sean Penn sought to shut down “The Gunman,” Netflix had its artists back. And then there was the clever cease-and-desist sent to a Stranger Things Bar that went viral. When your lawyers are lovable, you’ve done something.

Netflix operates differently than most Valley titans. While YouTube has squeezed contributors and musicians, Netflix is controversial for overpaying for content. It’s not an aggressive copycat like Facebook. It doesn’t have stories of anyone working in untoward conditions like Amazon. It is criticized most for overpaying creative talent. For giving them too much creative freedom. Netflix is hard to pass up, not because of its reach, but because of that freedom.

There's no question that a Netflix, and to some extent Amazon, can offer creative people a different kind of freedom than they could ever have working for a network.

ABC has been great to her. They literally turned over Thursday night to her. You can't ask for more from network television. She even said that the fact that she had to do let's call it 20, 22 episodes every season of her shows is, it's a lot. You have to make sure that they fit into the formats that allow for advertising every 8 to 11, maybe 13 minutes.

It's got major constrictions on it that you're never going to have at a place like Netflix. She can tell stories at exactly the length that feels right to the narrative. That's a huge luxury. I get completely why she's doing it.

It would be easy for Netflix to hide behind the great artist myth that allowed Roman Polanski and Woody Allen to continue to thrive. Even in “woke AF 2017” Ben Affleck wasn’t dismissed from the Batman franchise after allegations of groping. It would be easy to take a middle ground, cancelling “House of Cards” which had run its course, and allowing Spacey to save face. After all, let’s remember, House of Cards— which would have been little without Spacey’s creepiness— is what put Netflix original content on the map. Amazon still hasn’t had a hit on that level; and Hulu only has just with “The Handmaid’s Tale.” Remember when Season Two came out and then President Barack Obama Tweeted that he was binging it from the White House?

No one was demanding more of Netflix.

Unlike Harvey Weinstein and his bespoke company or the Academy, which he had so much influence over, Netflix — having already cancelled House of Cards— was not so intertwined with Spacey that it had to take a major stand. I saw no #deleteNetflix hashtag, boycott or demand.

Let’s not assume this was about morality— such as it is in the industry— because every time we do that about a tech giant lately, we get let down.

Instead, let’s consider the argument that makes the most sense: Acting morally when Netflix didn’t have to was in the company’s best— fiduciary— interest. Just last week, we watched general counsels from the three largest tech companies pretend to be “deeply concerned” in front of congress and no one believed them. As an industry, we watched an Uber board member make a sexist joke at a meeting about how all the sexism at the company was totally gonna stop.

Airbnb came up with it’s generous insurance policy to protect home owners— against it’s lawyers’ “YOU’RE ONLY A PLATFORM!”/ “slippery slope!” advice— setting itself apart from a company like Uber who responded to an alleged rape in one of their cars by…. an attempt to smear the rape victim. But even that only came after several days of backlash after an incident where a homeowner’s house was destroyed and initially the company wasn’t particularly responsive.

It’s this thinking that makes Netflix such a singular company. It does what it doesn’t have to, because it sees the long game. It didn’t have to pay creators so much more; it didn’t have to give them as much creative freedom as it has. It could have just been slightly better and still been a viable option. Now with a move that cost it a declining series and a movie that wasn’t done yet, Netflix has given creators— especially women, people of color and anyone else who feels they’ve been on the bottom of the Hollywood Totem pole— another reason to come to them. There was already money. There was already creative freedom. Now there’s: We take sexual assault seriously.

There’s a problem though: The crew. One legitimate beef with Netflix’s actions is that they’ve put hundreds of crew members suddenly out of work in the name of doing the right thing. The Netflix thing to do might be to find a way to reboot the series, with Frank Underwood unceremoniously killed off and Spacey somehow removed as a producer, if possible. Or it might just agree to pay a generous severance to the cast and crew until they can find new projects.

This wouldn’t only be the “Netflix thing to do”— it would solve an unintended consequence that Netflix may have on its hands in the future otherwise. The only bad thing about being the company that will act so swiftly amid allegations of sexual harassment as to shut down production on a massive show, is that future whistleblowers will have to balance the good of the truth against a fear of putting their co-workers out of work.

In Harry Dreyfuss’s brave account of Spacey fondling him, he spoke of Spacey’s arrogance as much as the assault itself. How sure Spacey was that Dreyfuss wouldn’t speak up, because of the power he held in the situation, particularly as his father’s boss. In the future, a predator could use that same leverage to silence victims if the repercussion is production closing down.

But if Netflix is the place that not only has zero tolerance for sexual assault, but also takes care of the crew in the case a production has to be shut down, it suddenly attracts every show runner and writer and director who is looking at Hollywood men like a potential liability right now. And it likely attracts fewer predators, because they’ve taken away one lever for manipulating victims into silence.