I remember back in 2006. There was the usual speculation about who Time’s Person of the Year would be, and there were rumors that it might be someone from the budding Web 2.0 crowd, perhaps the founders of the early stand out of the time, YouTube.

Those guesses were partially right. It was “YOU”--  a nod to the growing user generated content revolution.

It’s clear now, more than a decade later, what that revolution has won us and cost us. It’s provided platforms for bullying and abuse that have lead to doxxing, threats and even suicides. It’s also provided platforms for people to come forward and right wrongs. On balance has it been good or bad for the world? That depends greatly on who you are, where you live in the world, and how much privilege you have, frankly.

Today, Time has pulled a similar move naming the “Person of the Year” as “The Silence Breakers.” It would have been easy to limit this to celebrities, but Time didn’t. Included are Isabel Pascual, “a woman from Mexico who works picking strawberries and asked to use a pseudonym to protect her family, Adama Iwu, “a corporate lobbyist in Sacramento” and Susan Fowler, “a former Uber engineer, eight months pregnant.”

Obviously, I’m particularly happy about Susan Fowler’s inclusion on the list. She’s a friend, and we’ve been victims of the same Uber smear machine. Still, it’s stunning to see her there: There was a time, not so long ago, when you could imagine Kalanick himself grinning from that Time cover: celebrated for ‘disrupting’ the law and ‘crushing’ his rivals. But no. Instead, chosen to represent Time’s person of the year is: The woman who brought Travis Kalanick down.

It’s also stunning that, by association, Travis Kalanick is being lumped in with some of the worst sexual harassers and abusers of the modern era. That’s how toxic the company Softbank is about to bail out is. That will be his legacy outside this echochamber, outside the people enriched by that toxic culture who perform gravity-defying feats of reality substitution to be OK spending that money.

It’s hard to think of a more extreme example of Silicon Valley’s stunning loss of soft power in the broader world.

It is not time for predators to try to make lemonade out of the situation by congratulating their victims. Justin Caldbeck: You called those ‘accusers’ (‘victims’ is a better word) liars and threatened them if they came forward after groping and propositioning them. Now you are “support stalking” them. Go the fuck away.

Also, Justin, while I'm on the subject, please stop sending creepy emails like this… 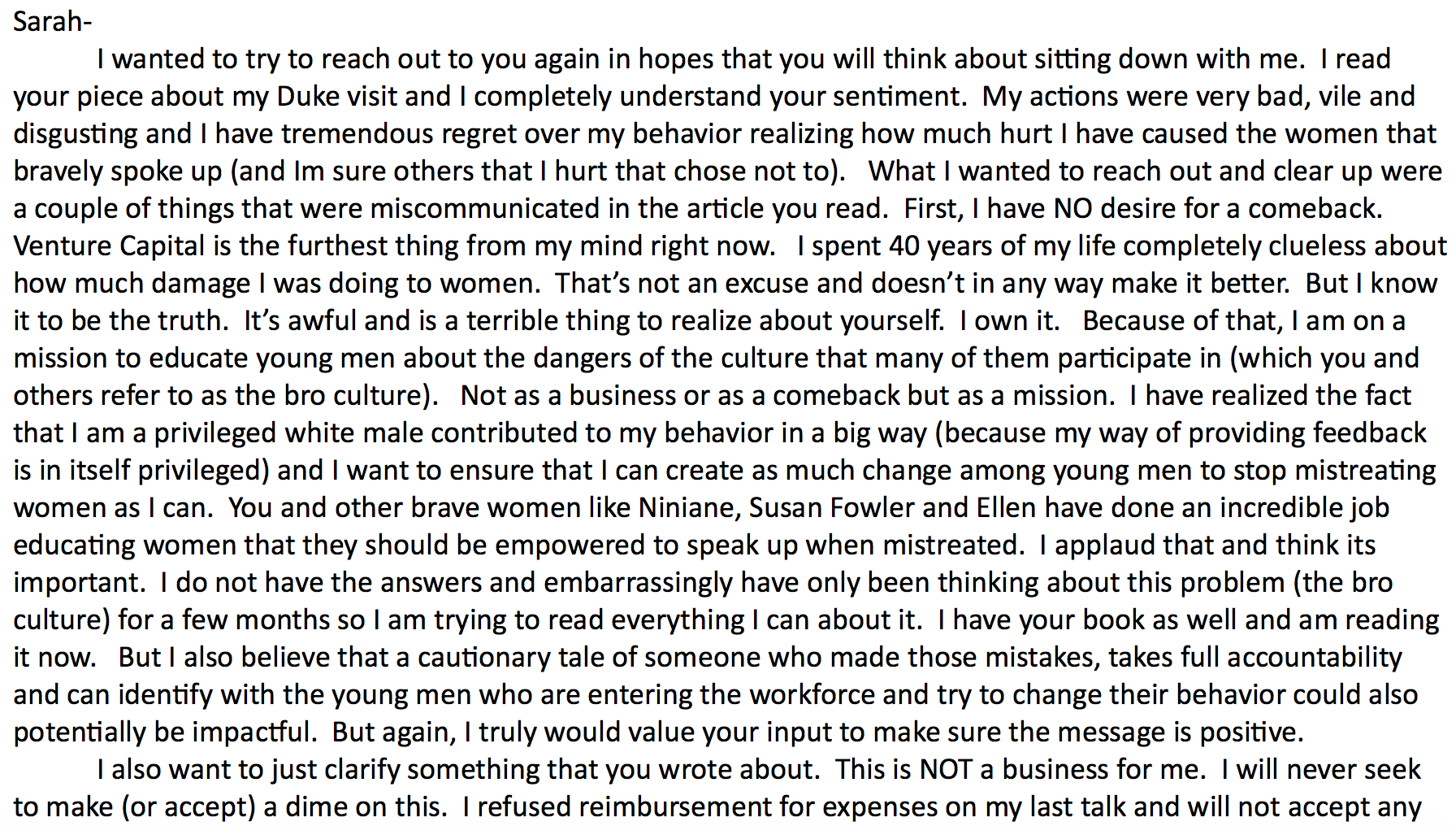 It is not the time to caution about backlash and anger and witch hunts, Sheryl Sandberg. It is not the time to propose that companies instill better processes as the solution. First off, there’s little evidence this is a witch hunt. There is little evidence any of the women coming forward have been anything but honest. That “caution” is dangerously close to “cool girlism.” And second of all, if we’ve learned one thing this year it’s just how little HR departments have women’s backs. A new process -- ultimately designed to protect the company-- simply isn’t the solution to women finding justice.

It is not the time to defend men who’ve been accused of assault, because in your case “it was just a joke!”, Arianna Huffington.

And this last one is the hardest to write: It is not time to be pissed at these women because you think you’ve fought just as long and hard - or longer and harder - for equality, if you broke your silence before it was cool, and you were not recognized. Worse: If you were not believed, if you were treated as a pariah because the time you came forward wasn’t convenient for the world.

I ache for the women who accused Donald Trump of assault, only to watch him get elected, and watch seemingly every other celebrity in the world find justice. I can’t imagine what the victims of Roy Moore feel watching one of the two major political parties endorse him.

I know you want to scream. And you are right, you should be recognized as well. As should all of those who, for whatever reason, simply aren’t able to speak out. As Time writes in its cover story...

A young hospital worker who had flown in from Texas completed the circle. She too is a victim of sexual harassment but was there anonymously, she said, as an act of solidarity to represent all those who could not speak out.

But today is the moment to celebrate what these women stand for as much as these women as individuals. We need young women to see them as heros, and heros are always abstracted narratives of our time. The credit of many is lumped into giving credit to one.

This is hard because a patriarchy works to pit us against one another. To believe we live in a zero sum world when it comes to women getting raises, promotions, acclaim or credit. When I feel that resentment welling up inside me, I frequently think of this quote by artist Marilyn Minter:

When I see an artist I love, I wanna kill her, especially if it’s really good… But what I do instead is I go up to them and tell them how much I love their work, and [how much] I want to get to know them, and the poison drains, and then they’re my colleagues.

Behind every good woman are a lot more good women who came before her, who support her, who held her hand when she decided to step forward. Know that I see all of you too today.