Regular Pando readers know we have a saying here: When a tech company tells you something is “too hard” what they are really saying is they don’t prioritize it.

These are companies that are tunneling through the earth to hurtle us between cities faster, companies colonizing the moon, companies beaming Internet down from planes, companies who have organized all of the world’s information, and connected billions of people around the world.

What’s more: Silicon Valley is known as a place that tackles “hard” problems. Since when did difficulty become an excuse here?

I made this point on Brian Stetler’s show Reliable Sources on New Year’s Eve on the subject of whether or not Facebook and Google were taking seriously the role they played in the Presidential election and whether the midterms would be any different. Let’s just say, I did not reassure Stetler.

This has rapidly become a major problem for Facebook since a year ago or so when Mark Zuckerberg scoffed at the idea that Facebook could have impacted the election. The problem isn’t what unhinged conservative or bleeding heart liberals or out of touch lawmakers think about Facebook’s role in society. The problem is what techies think of Facebook’s role in society. This is where shit got real towards the end of last year.

Nearly every person I know has listed among their New Year’s Resolution limiting their time on Twitter or Facebook, and these are people central to the tech industry. As we wrote last year: The “haters” are calling from inside Facebook’s own cap table-- with founding President Sean Parker and key early executives like Chamath Palihapitiya even admitting the negative impacts of Facebook on the world.

Consider this poll by CB Insights-- again a research company whose audience is predominantly the kind of tech and startups that endlessly give moral cesspools like Uber the benefit of the doubt. When asked “Which, if any, of the below companies will we look back at in 10 years and say that this company was a net negative for society, i.e. did more harm than good?” CB Insights readers overwhelming singled out Facebook. 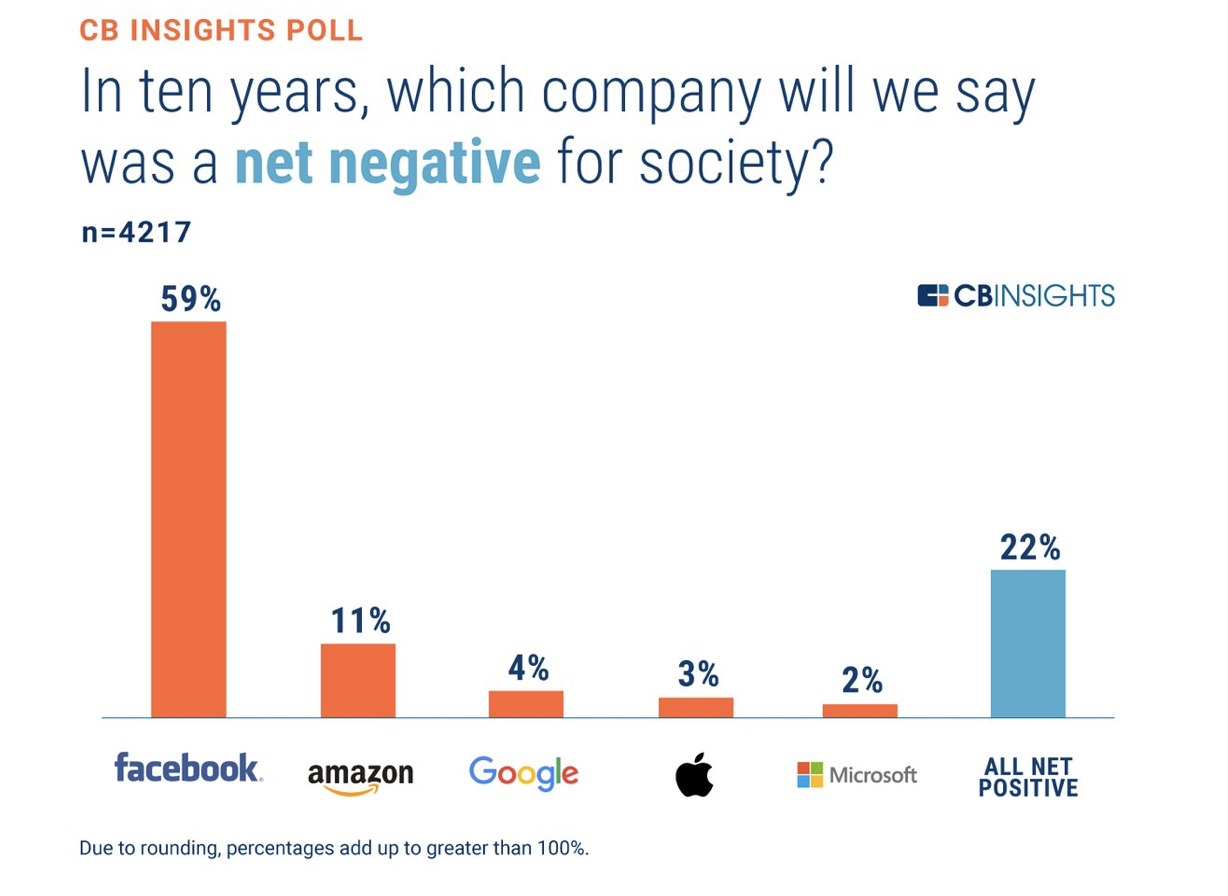 Remember all those early articles in 2008-ish saying that Mark Zuckerberg was more of a Bill Gates than a Steve Jobs? Well, apparently Facebook is the new "Evil Empire."

Here’s why this matters: Talent and acquisitions.

There are generally two zero sum resources in Silicon Valley: One is cash and the other is talent. Facebook has all the cash it needs. One of the reasons it has so successfully choked off competitors is that its done a great job of convincing talent to come to Facebook and stay at Facebook. Even more to the point: It has done a great job at convincing up and coming would-be challengers to sell to Facebook.

Not only do they sell, people like Instagram’s Kevin Systrom have become walking billboards for why Facebook is different than other tech giants. Facebook won three times with that single $1 billion purchase. First: It beat Twitter, re-won over teens and solved a lot of its then-problems with mobile. Second: It convinced would be founders that Facebook would keep all its promises as an acquirer, paving the way for deals like Oculus and WhatsApp. Third: Instagram has become the weapon for dismantling Snap.

Reportedly one of the reasons Evan Spiegel built Snap to begin with-- and didn’t want to sell to Facebook-- is because he found a lot of things about Facebook “creepy.” Founders and executives who have options don’t generally want to work at a place they worry will be a net-negative on society in the long run.

This problem has become big enough that it’s Mark Zuckerberg’s famous thing he’ll accomplish this year, like learning Mandarin, traveling to every state, wearing a tie everyday, building an AI system to run his house.

The world feels anxious and divided, and Facebook has a lot of work to do -- whether it's protecting our community from abuse and hate, defending against interference by nation states, or making sure that time spent on Facebook is time well spent.

My personal challenge for 2018 is to focus on fixing these important issues. We won't prevent all mistakes or abuse, but we currently make too many errors enforcing our policies and preventing misuse of our tools. If we're successful this year then we'll end 2018 on a much better trajectory.

If we take Mark Zuckerberg at his word, then starting in 2018, Facebook being used to manipulate people via Fake News, being used as a tool to sew discontent and division, and generally becoming something that makes people feel worse will become the Founder and CEO’s top priority.