The conference had a few impressive speakers like storied venture capital pioneer Magdelana Yesil and “Brotopia” author Emily Chang. But it also had another speaker whose name jumped out at Wang: Justin Caldbeck.

That’s right: The same Justin Caldbeck who once tried to use his position as a VC to pressure Wang to sleep with him. The same Caldbeck who Wang and several other women helped bring to justice last summer, when they bravely went on the record to talk about their experiences and began a reckoning of venture capitalists losing their jobs for abusing their position of power over women.

That Justin Caldbeck was scheduled to speak at a Women in STEM gender conference.

As I’ve written before, Caldbeck has embarked on a hideously offensive apology/rebranding tour, to promote himself as a newly-woke advocate for women. Here’s what I’ve learned from being exposed as a serial sexual harasser!

Consider this a lesson in the new rules of how things work in Silicon Valley.

After hearing about the conference, Wang reached out to women, and women stepped up. Within hours, other women in the Valley were emailing the organizers and putting public pressure on female speakers to pull out. 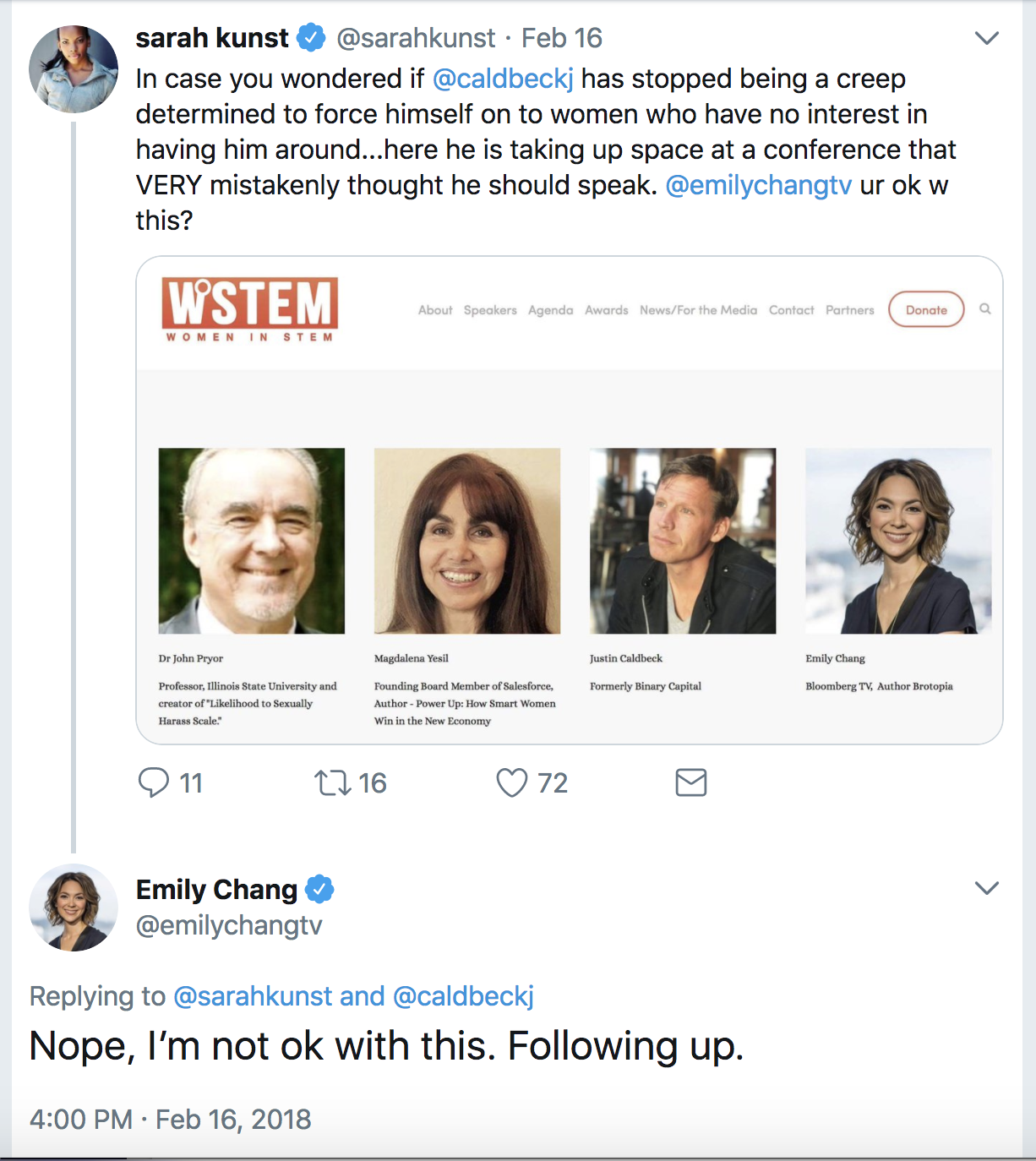 Chang quickly pulled out of the event…

Then Yessil who made more of a public statement about it… 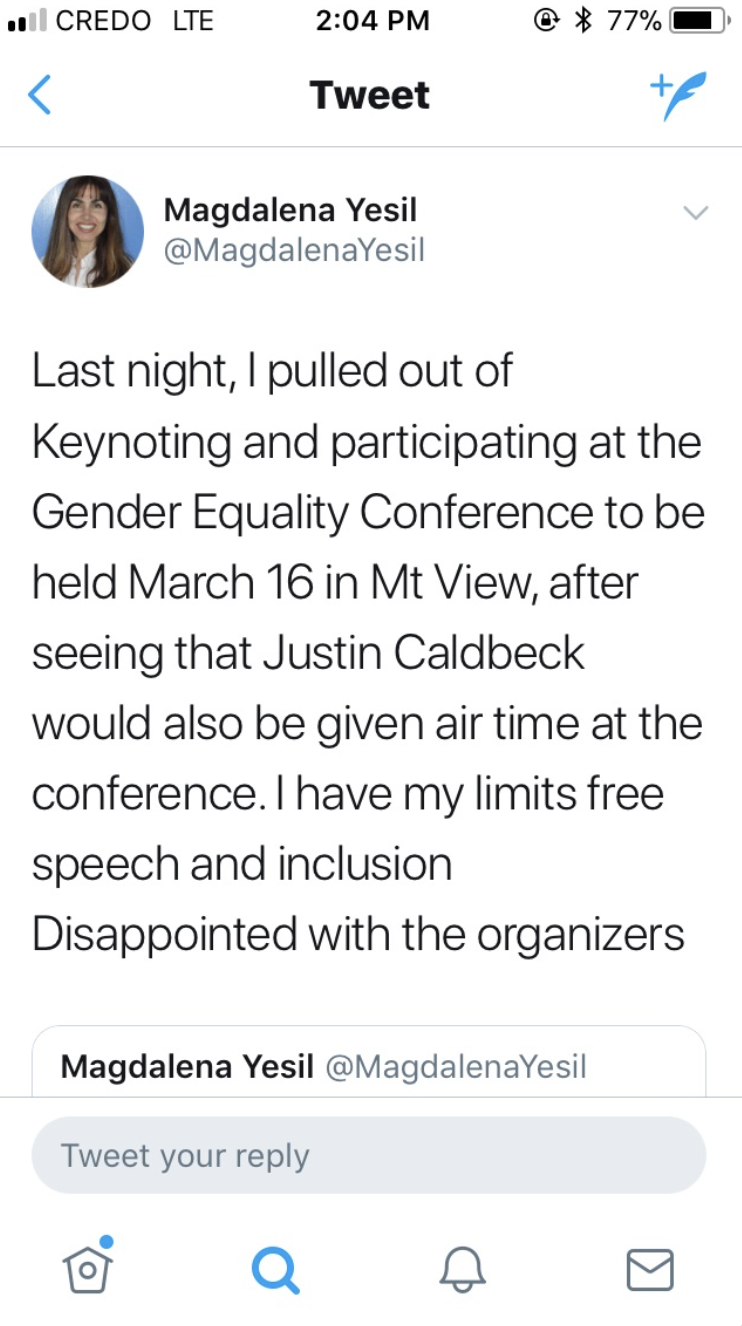 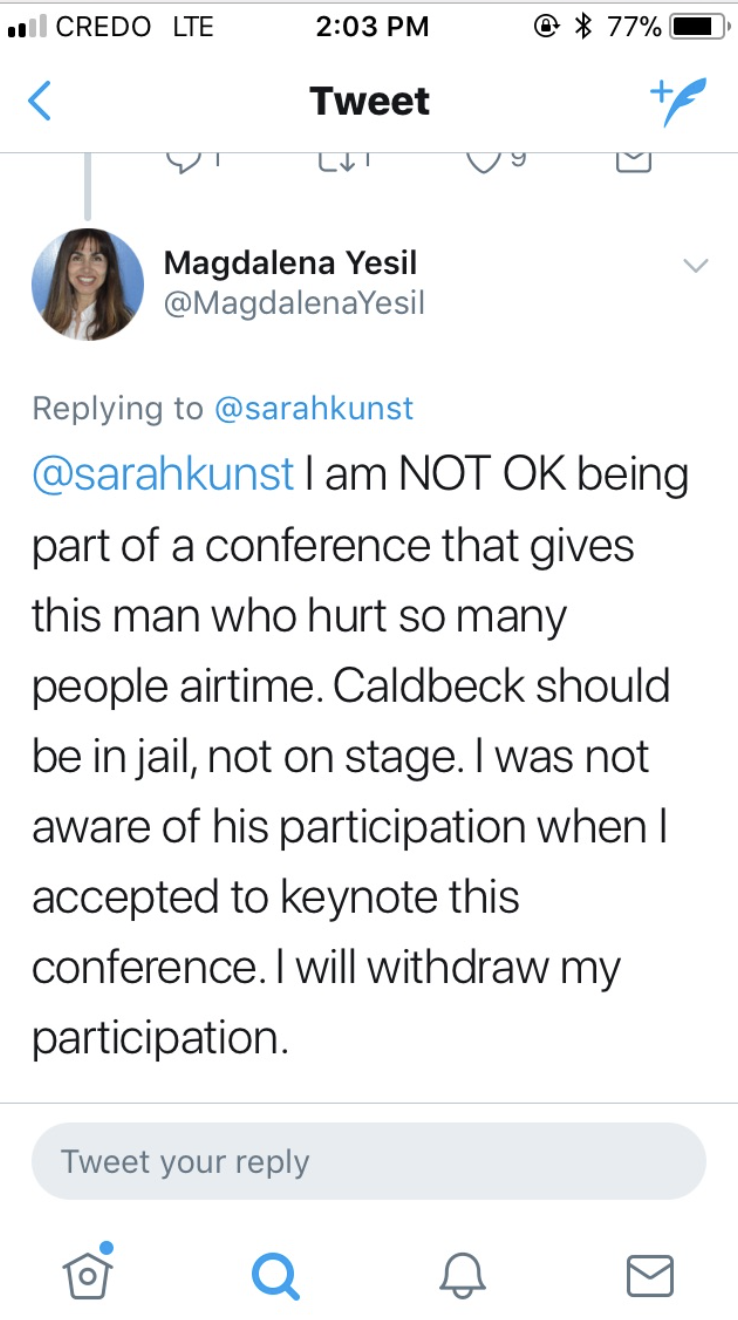 And Entrepreneur Arjita Alka Sethi announced she too was pulling out of the event.

Update: Samsung's Claudio Vespucci told Pando through a spokesperson that he has also withdrawn from the event.

Planned Parenthood pulled out as a sponsor after that. And on Tuesday, Wang says Rachael Myrow from KQED told her she had also pulled out as a speaker. She was the one who was supposed to interview Caldbeck. (Myrow still appears on the speaker list as of Wednesday morning. I've emailed her to confirm whether she still plans to speak.)

Here’s how they’d billed his talk: 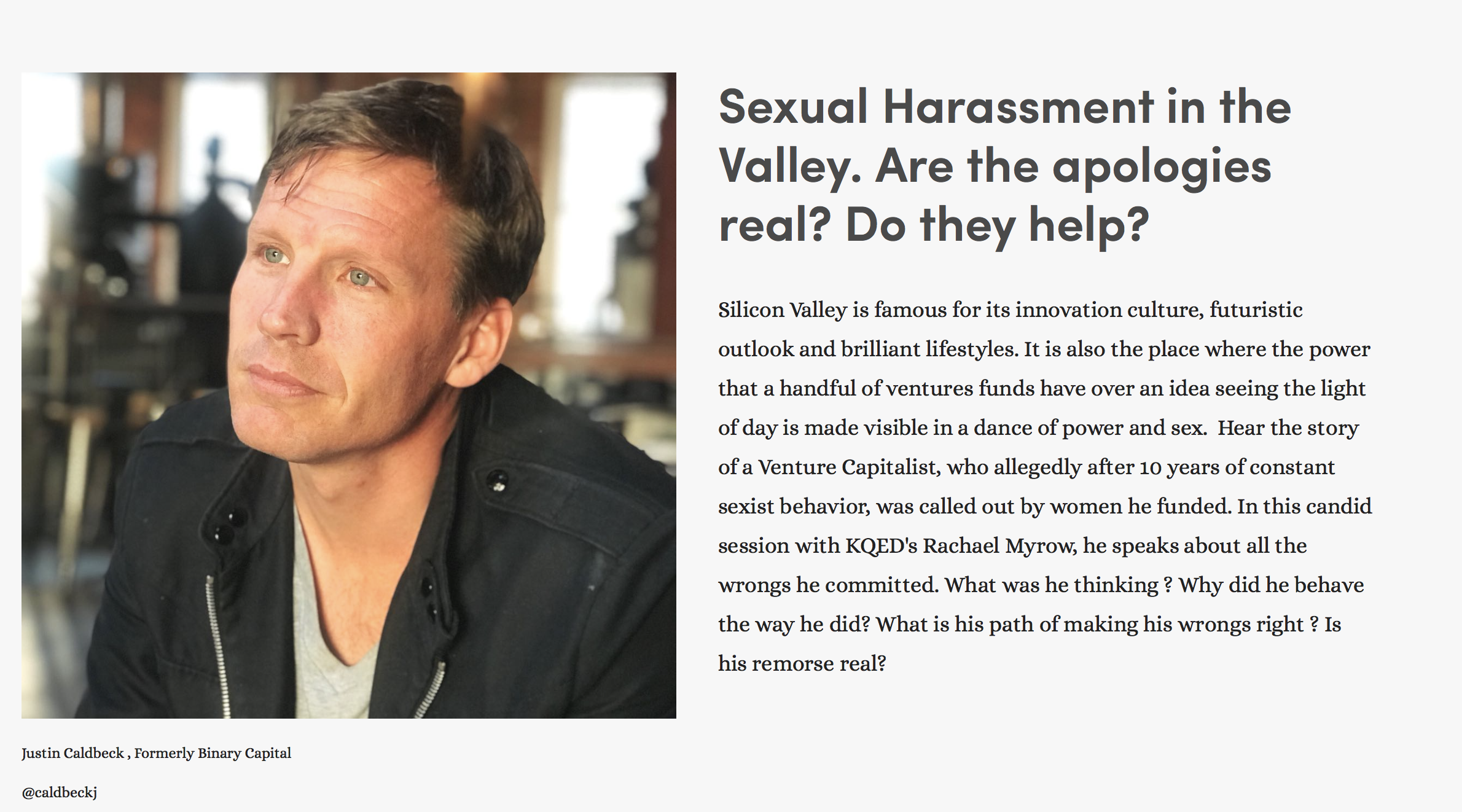 Amazingly in the face of all of this, the organizers doubled down in their determination to have Caldbeck speak.

While I am deeply appreciative of your reservations about appearing to condone or minimize Mr. Calbeck's behavior, as a researcher who has studied harassers for many years, I am very interested in hearing what Mr. Calbeck has to say about his behavior. I am also interested in your response to what he has to say. If you read my work, you will see that I am no apologist for harassers. I am acutely sensitive to the psychological and professional harm caused by sexually harassing behavior. My experience is that harassers are often deluded about consequences of their behavior. They often justify their behaviors with rationalizations that minimize the harm and blame the victims. During Mr. Calbeck's part of the program, I intend to listen intently and take notes. Please understand that my participation in this conference in no way condones his behavior.

Thank you all for agreeing to be speakers  and supporters at our Gender Summit.

We are all excited and in the throes of final arrangements for the conference.

Beginning Friday, we realize that many of you have received messages and Tweets from Niniane Wang who has been vocal in accusing some Silicon Valley investors of being inappropriate with her, and others. Our board and employees have also received some messages.

We had asked Ms.Wang to speak at our summit a few months back– she declined citing that she was not interested in speaking about this topic. Being a team consisting of harassment and violence survivors ourselves, we empathize with her pain.

We base our work on scientific research and its application –  the more divergent the data points; the more impactful we are in addressing the problems we are trying to solve.

All of you are approaching the same problem in a very objective, scientific and extremely divergent manner and that is where it makes the most impact to the work we do in making women safer.

Mr Caldbeck is being interviewed for the reasons of his behaviour by a media outlet affiliate in a separate format. We trust the stellar non-biased approach of this respected media outlet.

Our strategy for the summit is very clear.

o We will not engage with anyone regarding the dilution of the integrity of our efforts to make a real change.

o We will not play 'below the belt' with anyone.

o We will keep our heads down and keep doing the work that we do in making workplaces safer for all genders.

Thank you for being such strong supporters of our mission to make a change. Should you have any questions/ comments - please do not hesitate to approach us.

Couple things. First off, Caldbeck’s behavior isn’t “alleged.” He has admitted to it. From the LA Times last June:

Caldbeck resigned as an investor at Binary Capital last week after acknowledging that he used his power "for sexual gain" — an admission that followed harassment accusations from six women. This week, his former employer, Lightspeed Venture Partners, said it should have taken "stronger action" when it received a complaint about Caldbeck.

At every stage, multiple women joined Wang in emailing those defending the decision. Robin Wolaner, a serial entrepreneur and angel investor in the Valley, penned this response to Pryor:

Thank you for your response to my acquaintance/hero Niniane.  However, I would like to correct a few mis-understandings.

First, as a researcher you could talk with Mr. Caldbeck without giving him a public platform at a women-centric event.  (Well, theoretically women-centric, with the withdrawal of several keynote speakers who, unlike you, saw the inappropriateness of Mr. Caldbeck's inclusion, I think it's now 50-50 male-female. One of those formerly scheduled speakers said "Caldbeck deserves to be in jail, not on stage.")

Secondly, Ms. Kaul conveyed to you only Niniane's objections (which should be enough, frankly).  When I contacted her privately, [Kaul] several times called this a "witch hunt" and challenged my right to complain if I hadn't had personal experience of Mr. Caldbeck.  So she is very much part of the problem.

Finally, Ms. Kaul thinks that offering Niniane a chance to speak (an actual women in STEM, unlike most of the speakers) must mitigate this offensive invitation.  I don't know why Niniane declined -- obviously before she knew of Caldbeck's inclusion -- but since Caldbeck sent cease-and-desist notices to the brave women who stepped forward about him, maybe that was a factor.  Ms. Kaul appears cut from the same threatening cloth.  When I wrote to her, civilly, she immediately added two lawyers to the thread.

You are endangering your reputation by participating in this conference.

Finally, yesterday, Caldbeck was removed from the agenda. This had also happened over the weekend, and he was subsequently added back, but one speaker I reached out to this morning confirmed that the organizers told her Caldbeck would not be speaking.

The takeaway from this shouldn’t be that Justin Caldbeck shamelessly keeps trying to find ways to rehabilitate his image. That’s old news. The takeaway is the divergence between the women in this ecosystem who are banding together and not having it, and the few remaining “cool girls” who are aiding in whitewashing the track records of admitted predators.

In this case, the former won after five days of exerting pressure. But that doesn’t change the fact that the female organizer of the event spent days doing the dirty work of an admitted predator by attempting to smear one of his victims. She remains in charge of setting the agenda for the event which now, as of this morning, has more men advertised to speak than women.

Sometimes the silent enablers are just as dangerous as the predators.