Sheryl Sandberg isn't Zuckerberg's nanny... but that doesn't mean she can hide from the Cambridge Analytica scandal

This is one of those weeks that Sheryl Sandberg may be regretting tying the phrase “Lean In” so tightly to her personal brand.

If I’ve seen one “Lean Out” joke about Sandberg and Mark Zuckerberg’s silence inside and outside their company amid the most damaging scandal its ever faced, I’ve seen eight million.

A more interesting observation today is whether or not gender is at play in the public and reporters continually asking where “Mark and Sheryl” are, versus just Zuckerberg.

First off: Gender is always at play. There’s a trope that’s become particularly heightened in Silicon Valley of people infantilizing male founders, and expecting older women to sweep in and clean up the mess.

We saw this last year when commentators clamored for “a Sheryl” or even, actually the real Sheryl Sandberg, to go clean up Uber. At the time, the hope was a female number two could do the hard work, while founder Travis Kalanick stayed CEO, continued to get paid for that job, and “grew up.”

The infantilization of male tech founders is as bizarre as the idea that accomplished female executives should act as their nannies. Kalanick was in his 40s and had grey hair when the argument was circulating the Valley and the tech press that the poor little baby just didn’t know not to steal billions of dollars in trade secrets, smear rape victims, and treat women at his company horribly. 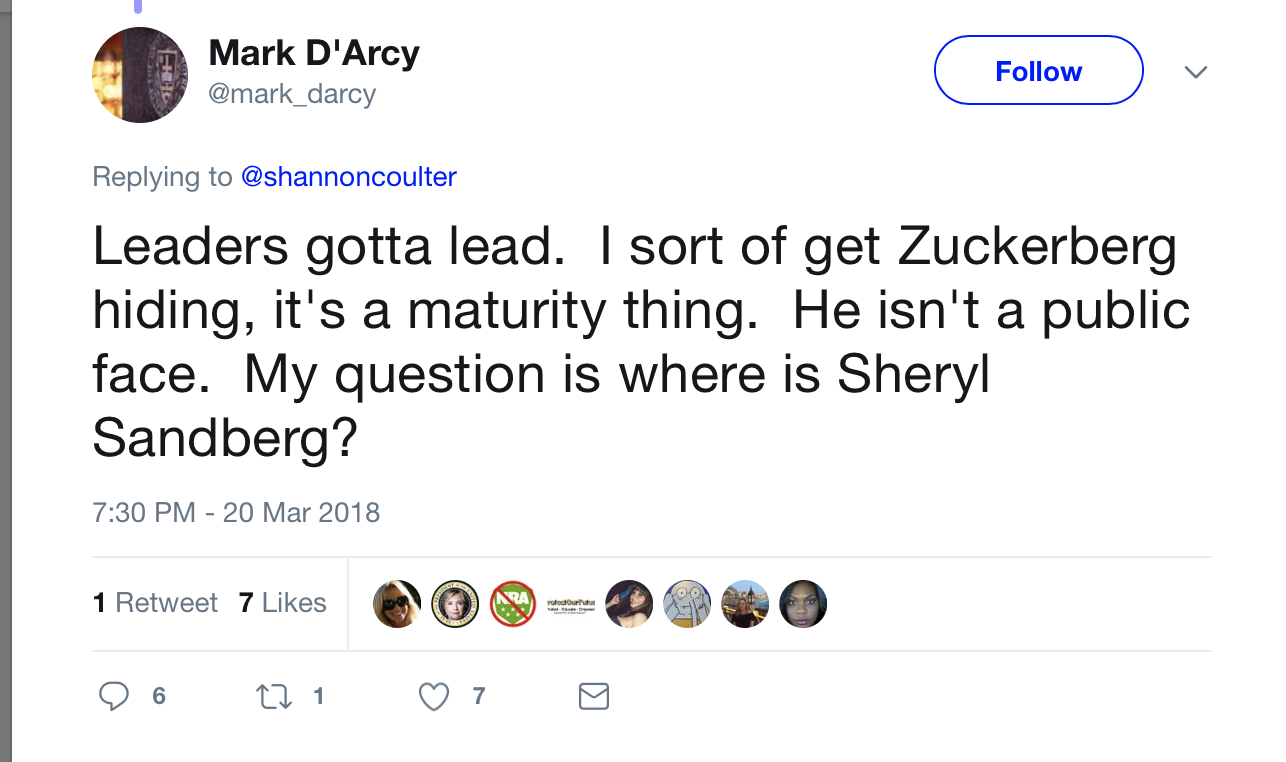 What? Zuckerberg has lead this company for 14 years. He has grown it to a half a trillion dollars in market cap, with a far stronger stranglehold on control than most tech founders. He has been called more powerful than any world leader, which by the way, he knows pretty much all of them. He is also a father of two. He answers to Wall Street every quarter.

How has he stayed stuck in your mind as a 19-year-old wearing a hoodie is some kind of gender Rorschach test, for sure. So that guy right there: Yes, he is saying something gendered.

But this is not all gender, any more than the take down of Theranos’ Elizabeth Holmes was all gender. Sure, plenty of misogynists say “this is what happens when we give women a unicorn valuation.” And yep: Holmes is not the only one in the DISRUPT! era who likely engaged in fraud.

But that doesn’t mean the fraud wasn’t real. And yes, it’s more crushing because of what she momentarily represented for women. Role models are key to women believing this is a dream for them too. But giving her a pass doesn’t help the women’s movement out one bit.

There are two legitimate reasons that Sandberg owns this mess and they are both the results of her own actions and strategy for career advancement.

The first is that Sandberg was long the more politically connected and astute of the two. That was one of the appeals in hiring her back in 2008, just after MySpace had suffered under the eyes of regulators and Facebook was becoming a more powerful force in the world. Sandberg was on the bleeding edge of tech’s 2010-ish political awakening and increase in lobbying might and crisis comms and ex-State Department hires.

This 2014 Pando story shows just how cozy Sandberg was with the Obama White House: She lead tech execs in visits and even hitched a ride home on Air Force One. When tech execs were summoned to Trump Tower, it was artful dodging on Zuckerberg’s part not to attend, but it also made sense because Sandberg had frequently been the one to attend those meetings. For better or worse, she owns the intersection of Facebook and politics. She has made herself the face of that part of the company, despite silly speculation that Zuckerberg was planning a run for President.

The second reason is that Sandberg’s fame and brand isn’t an accident. She painstakingly crafted her image through two bestselling books that show the warmer and more vulnerable side of her leadership, and years of television appearances and well-selected keynotes and appearances. She had benefited from that: Sandberg is easily the most senior woman in tech, and the most respected despite not being a founder or a CEO. According to First Round’s 2016 State of Startups, Sandberg was the most cited female answer to what tech leader people admire most. She got 1% of overall responses, compared to 6% for Mark Zuckerberg and 5% for Steve Jobs. She outranked hundreds of male founders and CEOs of billion dollar companies. And she got 5% of the write-ins from female respondents. No other female leader came close.

Think of how unknown Tim Cook was before Steve Jobs health became critical. Can you name the number two executive at Google? At Microsoft? At Snap? At any other multi-billion dollar tech giant?

I’ve written before that Sandberg has turned her back on the women she sought to inspire with “Lean In” once Trump won the Presidency. Some 18 months later, I still stand by what I wrote.

It was Sandberg who made her story intertwined with feminism, built her brand on lifting up women, and loudly and unapologetically taking on feminist issues and pro-mother issues...

The press didn’t make Sandberg into a feminist tech hero, she did. There was no pressure or precedent for female tech leaders to identify so heavily with women’s issues. And that’s why she struck such a chord with so many women…

...She defended Peter Thiel staying on Facebook’s board. She defended her boss’s dismissal of the idea that fake news impacted the election. She-- not Zuckerberg-- went to that meeting and sat behind the Trump water. And most surprising of all: Sheryl Sandberg had absolutely nothing public to say about last weekend’s women’s march, the largest feminist event in our lifetimes. The largest American protest. The time we actually saw footage on every major network and newspaper of what she has been saying for years women need to do: Linking arms and standing together....

It is impossible to imagine that Sandberg has absolutely nothing to say about the women’s march, that she simply didn’t notice it happened. It strains credulity almost as much as the idea that Facebook’s trending news algorithm didn’t notice it. It’s particularly remarkable given how much of the march was organized on Facebook.

Sandberg can not or will not even acknowledge the most feminist thing that’s happened, which was largely organized on her company’s site and aligns with her stated personal political views. I’m not sure we could have clearer evidence at this point that Facebook is bending over backwards to embrace a Donald Trump world…

Sandberg has sadly modeled the worst fears women of color have in being part of the broader feminist movement. And in doing so, she’s given credence to a lot of unfair criticism she got after LeanIn was published: That she was arguing feminism from a position of luxury and privilege…”

Principles aren’t something you only have when it’s convenient; when it aligns with your marketing plan and your “fiduciary duty.” If we had questions about what Sandberg truly stands for in Trump’s America a year ago, we have even more questions as news unfolds about Facebook’s role in creating said America.

Sandberg’s $1 million donation to Planned Parenthood and mea culpa on stage with Kara Swisher a week after that piece ran were small Band Aids more than they were the harbinger of her re-engagement in the explosive women’s movement. Her statements on #metoo have mostly contained cautions about how the movement may impact men at work… the much-warned about “backlash” which is often used to silence or delegitimize women coming forward.

You’re only going to make things worse for women! Be careful! They won’t mentor us if they’re too scared! Won’t someone think of the poor, confused powerful men!

Again: The infantilization of adult men with powerful jobs rears its heads. Somehow we’re expected to believe men who can run multi-million dollar enterprises can’t wrap their heads around a one-on-one meeting with a woman whose leg you now aren’t allowed to grab. I marvel at how many men in my life, on my company’s board, on our cap table haven’t once had to ask me how they are supposed to act around women in a post-me too world. They seem to just get the concept of respect.

Like anything, gender dynamics are likely putting more pressure on Sandberg than a man in her position might get. But that doesn’t mean she doesn’t have very real questions to answer right along with Zuckerberg